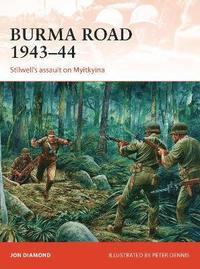 av Jon Diamond
Häftad Engelska, 2016-01-20
279
Köp
Spara som favorit
Skickas inom 7-10 vardagar.
Gratis frakt inom Sverige över 159 kr för privatpersoner.
Finns även som
Visa alla 2 format & utgåvor
Myitkyina was a vital objective in the Allied re-conquest of Burma in 1943-44. Following the disastrous retreat from Burma in April 1942, China had become isolated from re-supply except for the dangerous air route for US transports over the Himalaya Mountains. The Burma Road, which ran from Lashio (south of Myitkyina) through the mountains to Kunming was closed as a supply route from Rangoon after the Japanese conquest. Without military assistance, China would be forced to surrender and Imperial Japanese Army forces could be diverted to other Pacific war zones. This is the history of the ambitious joint Allied assault led by American Lt. Gen. Joseph W Stilwell and featuring British, American and Chinese forces as they clashed with three skilled regiments of the Japanese 18th Division. Packed with first-hand accounts, specially commissioned artwork, maps and illustrations and dozens of rare photographs this book reveals the incredible Allied attack on Myitkyina.
Visa hela texten

Jon Diamond is a practising physician who has had a life-long interest in military history. A graduate of Cornell University, Jon has been on the faculties of Harvard Medical School and Pennsylvania State University. He has served as a civilian attendee to the United States Army War College National Security Seminar in Carlisle, Pennsylvania and has written a significant number of articles and papers including over fifteen for Military Heritage Presents WW II History. He has just completed a book on David Low's Cartoons and the British Policy of Appeasement. He resides in Hershey, Pennsylvania. Peter Dennis was born in 1950. Inspired by contemporary magazines such as Look and Learn he studied illustration at Liverpool Art College. Peter has since contributed to hundreds of books, predominantly on historical subjects, including many Osprey titles. A keen wargamer and modelmaker, he is based in Nottinghamshire, UK.