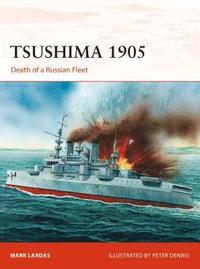 Death of a Russian Fleet

av Mark Lardas
(2 röster)
Häftad Engelska, 2018-11-29
189
Köp
Spara som favorit
Skickas inom 5-8 vardagar.
Fri frakt inom Sverige för privatpersoner.
Finns även som
Visa alla 2 format & utgåvor
Japan was closed to the world until 1854 and its technology then was literally medieval. Great Britain, France and Russia divided the globe in the nineteenth century, but Japan was catching up. Its army and navy were retrained by Western powers and equipped with the latest weapons and ships. Japan wanted to further emulate its European mentors and establish a protectorate over Korea, yet Japanese efforts were blocked by Imperial Russia who had their own designs on the peninsula. The Russo-Japanese War started with a surprise Japanese naval attack against an anchored enemy fleet still believing itself at peace. It ended with the Battle of Tsushima, the most decisive surface naval battle of the 20th century. This gripping study describes this pivotal battle, and shows how the Japanese victory over Russia led to the development of the dreadnought battleship, and gave rise to an almost mythical belief in Japanese naval invincibility.
Visa hela texten

Mark Lardas holds a degree in Naval Architecture and Marine Engineering, but spent his early career at the Johnson Space Center doing Space Shuttle structural analysis and space navigation. An amateur historian and a long-time ship modeler, Mark Lardas is currently working in League City, Texas. He has written extensively about modeling as well as naval, maritime and military history. Peter Dennis was inspired by contemporary magazines such as Look and Learn, leading him to study Illustration at Liverpool Art College. Peter has since contributed to hundreds of books, predominantly on historical subjects, including many Osprey titles. A keen wargamer and modelmaker, he is based in Nottinghamshire, UK.