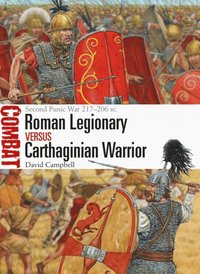 av Campbell David Campbell
E-bok (PDF - DRM), Engelska, 2018-08-23
167
Ladda ned
Spara som favorit
Ladda ned och läs i en e-boksläsare. Tips på appar
Finns även som
Visa alla 2 format & utgåvor
The peace that followed the First Punic War was shallow and fractious, with the resumption of hostilities in 218 BC sparked by Carthaginian expansion in Iberia seeing Rome suffer some of the worst defeats in her entire history. The Carthaginian army was a composite affair primarily made up of a number of levies from Africa and around the Mediterranean augmented by mercenaries and allies, and these troops crushed the Roman heavy infantry maniples in a series of battles across Southern Europe. Improvements made to their military, however, would see Roman revenge visited on Hannibal in full measure by Scipio, who would beat him at his own game and bring Roman legions to the gates of Carthage itself. In this study, the epic battles at Lake Trasimene (217 BC), Cannae (216 BC), and Ilipa (206 BC) are explored in detail, supported by carefully chosen illustrations and specially commissioned full-colour artwork and mapping.
Visa hela texten