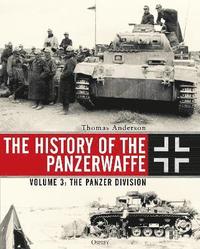 The History of the Panzerwaffe

av Thomas Anderson
Inbunden Engelska, 2020-01-23
365
Köp
Spara som favorit
Finns även som
Visa alla 2 format & utgåvor
The first two volumes of the History of the Panzerwaffe have described how the Germans transformed armoured warfare from a lumbering and ponderous experiment in World War I into something that could decide the outcome of conflicts, and how the legendary Panzerwaffe overran Western Europe and reached the gates of Moscow to the east, before taking its place in the forefront of German defence from the D-Day landings to the valiant last stand in Berlin. This third volume focuses on the most important units in the Panzerwaffe, and some of the most famous units in the history of warfare: the Panzer Divisions. It details their pre-war origins and how they developed over the course of the war, covering all the specialized units and how they operated on the battlefield. The title is illustrated throughout with many rare and previously unpublished images and the text draws heavily on original German documents.
Visa hela texten

A German national, Thomas Anderson is a specialist on German armoured fighting vehicles of World War II. He has spent decades trawling the archives throughout Germany and the rest of Europe to discover little-known facts and never previously published photographs of the might of the Blitzkrieg. A modeller, he regularly contributes to popular modelling and historical magazines across the globe, including Military Modelcraft International (UK), Steel Art (Italy), Historia Militar (Spain) and Batailles & Blindes (France) as well as many others. He lives in Hanigsen, Germany.