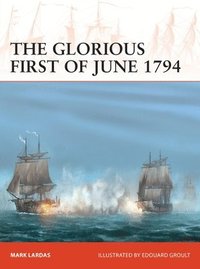 The Glorious First of June 1794

av Mark Lardas
Häftad Engelska, 2019-10-31
189
Köp
Spara som favorit
Skickas inom 5-8 vardagar.
Fri frakt inom Sverige för privatpersoner.
Finns även som
Visa alla 2 format & utgåvor
As 1794 opened, Revolutionary France stood on a knife's edge of failure. Its army and navy had been shaken by the revolution, with civil war and famine taking its toll on their resources. Seeking to bring a revitalizing supply of food from its Caribbean colonies and the United States, the French government decided to organize a massive convoy to bring the New World's bounty to France. However, in order to succeed in their mission, the French Navy would have to make a deadly crossing over the North Atlantic, an ocean patrolled by the Royal Navy, the most powerful navy force in the world, whose sailors were eager to inflict a damaging defeat on Revolutionary France and win their fortune in prize money. Illustrated throughout with stunning full-colour artwork, this is the full story of the only fleet action during the Age of Fighting Sail fought in the open ocean, hundreds of miles from shore. Taking place over the course of a month, the inevitable battle was to be a close-run affair, with both sides claiming victory. To the French, it was le Bataille du 13 prairial, a notable day in their new, scientific Revolutionary calendar. For the British, it was the Glorious First of June.
Visa hela texten

Mark Lardas holds a degree in Naval Architecture and Marine Engineering, but spent his early career at the Johnson Space Center doing Space Shuttle structural analysis, and space navigation. An amateur historian and a long-time ship modeler, Mark Lardas is currently working in League City, Texas. He has written extensively about modeling as well as naval, maritime, and military history. Edouard Groult grew up inspired by watching historical documentaries with his father and developed a fascination for historical and fantasy art. Following art studies in both Paris and Belgium he worked as a concept artist in the videogame industry and in recent years has also undertaken historical commissions while working as a freelancer for historical magazines. He lives and works in Oxford, UK.