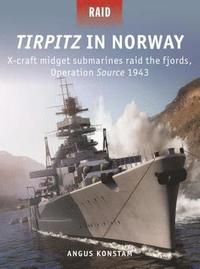 av Angus Konstam
Häftad Engelska, 2019-11-28
159
Köp
Spara som favorit
Skickas inom 5-8 vardagar.
Fri frakt inom Sverige för privatpersoner.
Finns även som
Visa alla 2 format & utgåvor
In September 1943, under the cover of darkness, six British midget submarines crept into the heart of enemy territory, penetrating a heavily guarded Norwegian fjord in an attempt to eliminate the threat of the powerful German battleship, the Tirpitz. Numerous previous attempts to attack the ship from both air and sea had failed, and this mission was carefully strategized, and undertaken by skilled operatives who had undergone extensive training in an isolated sea loch. Though five of the six X-Craft submarines were either lost or captured, two crews had just enough time to lay their explosive charges, which detonated after they were forced to the surface, putting the Tirpitz out of action for a crucial six-month period. Masterminded from a top-secret naval headquarters on the east coast of Scotland, Operation Source has been memorialised as one of the most daring naval raids of World War II. This new study tells the complete story of this epic operation in unparalleled detail, supported by full-colour illustrations and contemporary photography.
Visa hela texten

Angus Konstam hails from the Orkney Islands, and is the author of over 80 books, most of which are published by Osprey. This acclaimed author has written widely on naval history, from Sovereigns of the Seas and Piracy: The Complete History to his recent bestseller, Jutland 1916: Twelve Hours to Win the War. A former naval officer and museum professional, he worked as the Curator in both the Royal Armouries, Tower of London and the Mel Fisher Maritime Museum in Key West, Florida. He is now a full-time author and historian, and lives in Orkney, Scotland. Edouard Groult grew up inspired by watching historical documentaries with his father and developed a fascination for historical and fantasy art. Following art studies in both Paris and Belgium he worked as a concept artist in the videogame industry and in recent years has also undertaken historical commissions while working as a freelancer for historical magazines. He lives and works in Oxford, UK.