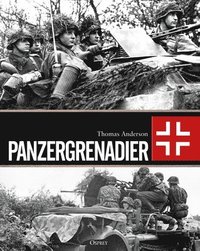 av Thomas Anderson
Inbunden Engelska, 2021-09-16
416
Köp
Spara som favorit
Finns även som
Visa alla 2 format & utgåvor
Throughout history, infantry has been the main attacking force deployed by armies around the world, but positioning substantial infantry forces has always required precious time to assemble the troops to launch an attack or form defensive positions. Transportation of men and their equipment has been a major issue through the ages, and one that was only partly alleviated by the establishment of railway systems in the 19th century and motor vehicles in the early 20th century. With the development of the German Panzerwaffe, military planners realized both the enormous potential of the tank as a breakthrough weapon, but also the issues faced by support units following the attacking force - including the infantry. A tank assault moved rapidly forwards and this required a motorized infantry which could keep pace with the attack and provide all necessary support. This motorized infantry element for a Panzer division was an integral Schutzenbrigade (rifle brigade), and it was equipped with a suitable means of transport - the Schutzenpanzerwagen (armoured personnel carrier). During Operation Barbarossa, German forces were faced by the Red Army and unforeseen weather conditions. With the onset of the harsh Russian winter the operation failed, and the war in the east entered a new phase. From experience gained from the operation, a new arm of the military was created: the Panzergrenadier. This groundbreaking book describes the development and evolution of the armoured infantry force that accompanied the German Panzers as they crossed the battlefields of Europe, as well as detailing the vehicles and equipment that were developed to support their specialized role.
Visa hela texten

Another great addition to this series of books from Thomas Anderson and Osprey. * Military Model Scene *

A German national, Thomas Anderson is a specialist in the German Armoured Fighting Vehicle of World War II. He has spent decades trawling the archives throughout Germany and the rest of Europe to discover little-known facts and never previously published photographs of the might of the Blitzkrieg. A modeller, he regularly contributes to popular modelling and historical magazines across the globe including Military Modelcraft International (UK), Steel Art (Italy), Historia Militar (Spain) and Batailles & Blindes (France) as well as many others. He lives in Hanigsen, Germany.