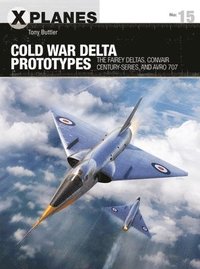 av Tony Buttler
Häftad Engelska, 2020-12-10
169
Köp
Spara som favorit
Kan levereras innan julafton!
Finns även som
Visa alla 2 format & utgåvor
At the dawn of the supersonic jet age, aircraft designers were forced to devise radical new planforms that suited the new power of the jet engine. One of the most successful was the delta wing. Although Gloster produced the delta wing Javelin, and Boulton Paul -its P.111 research aircraft - Fairey and Avro were the champions of the delta in Britain. Meanwhile in America, with the exception of Douglas's Navy jet fighter programmes, Convair largely had the delta wing to itself. These development lines, one on each side of the Atlantic, had essentially the same objective - to produce high- speed fighter aircraft. In Britain, the Fairey Delta 2 went on to break the World Air Speed Record in spectacular fashion, but it failed to win a production order. In contrast Convair received major orders for two jet fighter types and one jet bomber. At the same time, the British Avro company built the 707 family of research aircraft, which led to the famous Vulcan, to show how the delta wing could be adopted for a highly successful subsonic bomber. This book examines the development of the delta wing in Britain and America, and the way in which experimental aircraft like the Fairey Deltas proved their potential and versatility. In Britain it covers the Fairey Delta 1 and Fairey Delta 2, the proposed Fairey Delta Rocket Fighter and huge Delta 3 long range interceptor, and the Avro 707. On the American side, it examines the Convair XF-92 and XF-92A, the development of the Delta Dagger/Delta Dart family, and the Convair Sea Dart - the world's only supersonic seaplane.
Visa hela texten

Tony Buttler joined High Duty Alloys in 1974 as a metallurgist and for nearly 20 years was involved in the testing of aluminium and titanium airframe and engine components. After leaving HDA, he earned his Masters degree in Archives and Library Studies at Loughborough University, and in 1996 began his career as an aviation historian. He has since written 30 books and numerous articles and has become particularly well-known for his work on prototypes and secret projects.