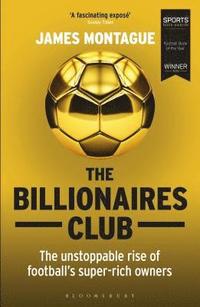 av James Montague
Häftad Engelska, 2018-08-09
129
Köp
Spara som favorit
Skickas inom 7-10 vardagar.
Gratis frakt inom Sverige över 159 kr för privatpersoner.
Finns även som
Visa alla 1 format & utgåvor
A compelling examination of football club ownership in the era of the super-rich Once upon a time football was run by modest local businessmen. Today it is the plaything of billionaire oligarchs, staggeringly wealthy from oil and gas, from royalty, or from murkier sources. But who are these new masters of the universe? Where did all their money come from? And what do they want with our beautiful game? While almost cloaked in secrecy, the billionaire owner has to raise his head above the bunker when it comes to football ownership - a rare Achilles heel that allows access to worlds normally off limits journalists and outsiders. In the Billionaires Club James Montague delves deeper than anyone ever dared, to tell this story for the first time. He criss-crosses the world - from Dhaka to Doha, from China to Crewe, from St Louis to London, from Bangkok to Belgium - to profile this new elite, their network of money and their influence that defies geographic boundaries. The Billionaires Club is part history of club ownership, part in-depth investigation into the money and influence that connects the super-rich around the globe, and part travel book as he follows the ever-shifting trail around the globe in an attempt to reveal the real force behind modern-day football. At its heart The Billionaires Club is a football book, about some of the biggest clubs in the world. But it is also about something bigger: the world around us, the global economy, where the world is headed and how football has become an essential cog in this machine. The book discusses the dawn European Super League, and the repercussions for the future of the game.
Visa hela texten

The business-minded and the football crazy... will find [this book] hard to resist * Sunday Times * The Billionaires Club seeks to understand why the global super-rich suddenly became interested in football, and what the consequences of this trend have been * Irish Times * A fascinating read for the many football fans interested in the developments off pitch * Financial Times * Both surprising and insightful ... The book does a fine job of examining just why rich men choose to plough oodles of money into football * FourFourTwo * Montague... proves himself adept here at rustling up enlightening stories on the game from relatively far-flung outposts and placing them in the context of a broader global picture * When Saturday Comes *

James Montague is an award-winning journalist who writes about football, culture and politics across the globe. He has reported from over 65 countries for the New York Times, World Soccer and the Bleacher Report, amongst others. He also features regularly on the BBC World Service's World Football podcast. His previous books are When Friday Comes: Football in the War Zone and Thirty-One Nil: On the Road with Football's Outsiders, which won Football Book of the Year at the 2015 British Sports Book of the Year Awards. Sports Illustrated described him as 'the Indiana Jones of soccer writing'. @JamesPiotr