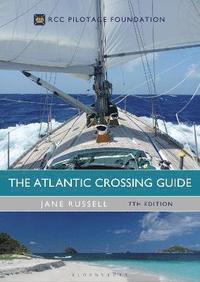 av Jane Russell
Inbunden Engelska, 2017-12-14
579
Köp
Spara som favorit
Skickas inom 10-15 vardagar.
Fri frakt inom Sverige för privatpersoner.
Finns även som
Visa alla 2 format & utgåvor
'I cannot imagine setting sail without it' SAIL 'A must for all aspiring ocean crossers' Yachting World We call it 'The Pond', yet the Atlantic Ocean covers one fifth of the surface of our planet and one third of its surface area of water. It is still a mighty big pond to cross! Realising the dream of an Atlantic crossing remains a challenge but the rewards are many and lifelong. The Atlantic Crossing Guide is well established as the standard reference for anyone planning an Atlantic voyage, whether via the trade wind route to the Caribbean or to Europe from the United States. The better prepared you are the greater your chances of success. Packed full of the collective wisdom of cruising sailors over four decades, this new edition has been updated to include advice on: PREPARATIONS * suitable boats, including considerations of hull integrity * equipment and maintenance * advances in navigation and communications systems * access to weather and routeing information * the balance of power input and usage * planning for hurricane season * risk management * crew harmony and health * provisioning PASSAGE PLANNING * Atlantic weather systems, including tropical waves and hurricanes * common routes and timings across the Atlantic * seasonal cruising along bordering coasts and within Atlantic island groups * fog and ice in the higher latitudes * key landfalls 'A fantastic amount of information' Yachting Monthly
Visa hela texten

I cannot imagine setting sail without it * SAIL magazine (US) * A vital part of the ship's inventory * Sailing Today * A fantastic amount of information * Yachting Monthly * Well established as the standard reference for anyone planning an Atlantic voyage. Packed full of collective wisdom of cruising sailors over four decades. * All at Sea *

Jane Russell trained as a research biologist and taught science before undertaking a 5-year circumnavigation, via Panama and Suez, with her husband. More recently they took their two children on a 15-month return voyage down the Atlantic coast and around the Western Mediterranean. She has worked for the RCC Pilotage Foundation since 2007 and is their current Editor-in-Chief. She is the author of the 6th edition of The Atlantic Crossing Guide. The Royal Cruising Club Pilotage Foundation was founded in 1976 with the objective of advancing 'the education of the public in the science and practice of navigation'. Its members write - and keep continually updated - pilot books covering many different parts of the world.

1 Thinking it through 2 Preparing the boat 3 Creating a home from home 4 Navigation and communications 5 A happy ship 6 Keeping healthy 7 Dealing with risk 8 Protocol and paperwork 9 Atlantic weather, currents and route timing 10 The Atlantic coast of Europe 11 Strait of Gibraltar and the Atlantic coast of Morocco to Madeira and The Canaries 12 Cape Verde Islands, Senegal and The Gambia 13 Atlantic Ocean - Trade Wind Routes 14 Landfalls in the Caribbean 15 Routes across the Caribbean and landfall in Panama 16 The Caribbean Islands to Florida 17 Landfalls on the Atlantic coast of the USA - including entrances into the Intracoastal Waterway 18 Passages in the middle latitudes of the North Atlantic - including landfalls in Bermuda and the Azores 19 Passages and landfalls in the higher latitudes of the North Atlantic