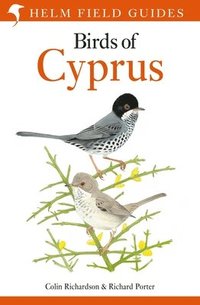 av Colin Richardson, Richard Porter
Häftad Engelska, 2020-01-09
359
Köp
Spara som favorit
Skickas inom 5-8 vardagar.
Fri frakt inom Sverige för privatpersoner.
Finns även som
Visa alla 2 format & utgåvor
Cyprus is a great place for birding, and one of the most popular places for birders to visit in Europe. It holds populations of a number of regional scarcities that are very hard to see elsewhere, plus a number of endemic subspecies, and the jewels in the crown - three full endemics, Cyprus Wheatear, Cyprus Scops Owl and Cyprus Warbler, the latter of which graces the jacket of this new Helm field guide to the island. Detailed plates are allied to concise identification text, with accurate maps stemming from Colin Richardson's decades-long programme of population-mapping on the island. Together, these elements make this the definitive guide to Cyprus's birds, one that no visitor to this beautiful island can be without.
Visa hela texten

Richard Porter is the unquestioned world authority on the birds of the region. The author of Birds of the Middle East, Richard has been active in the conservation of birds throughout the OSME region since the 1960s. His work in Iraq, Jordan, Saudi Arabia and Turkey remains inspirational to researchers throughout the region. Colin Richardson is an ornithologist with a particular interest in bird migration in the Middle East. He is on the editorial board of Sandgrouse and is the Cyprus representative for the Ornithological Society of the Middle East (OSME) and the Royal Naval Birdwatching Society. He was a council member of OSME from 2005-2010 and was awarded the Sheikh Mubarak bin Mohammed prize for services to Conservation and Ornithology in the United Arab Emirates in 1995.