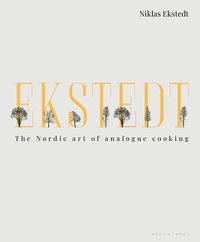 The Nordic Art of Analogue Cooking

av Niklas Ekstedt
(3 röster)
Inbunden Engelska, 2020-08-20
384
Köp
Spara som favorit
Finns även som
Visa alla 3 format & utgåvor
'With equal parts of birch wood and passion, we keep the flames alive. We cook all our ingredients over an open fire. Charcoal and smoke are our most powerful tools. No electric griddle, no gas stove - only natural heat, soot, ash, smoke and fire. We have chosen these ways to prepare our food as a tribute to the ancient way of cooking. At Ekstedt it is the flames that are superior.' Through his bold flavours at the eponymous Michelin-starred restaurant, Niklas Ekstedt ignites our primal fire-side instincts. His abandonment of modern technology may be a little difficult to replicate in your own kitchen, but his spirit will convince you to get back to basics where you can. The restaurant, Ekstedt, is at the very heart and centre of the book, providing the foundation for Niklas' stories of seasonal, and regional, traditional Swedish cooking. Dishes from the restaurant, and in the pages of this sumptuous book, include braised lamb shoulder with seaweed butter and wild garlic capers, juniper-smoked pike and perch, ember-baked leeks with charcoal cream, pine-smoked mussels, and wood-oven baked almond cake. Stunning photography from David Loftus brings Niklas' recipes and the Nordic seasons to life. ------------------------------------------- Praise for Food From The Fire Best books of 2016 - London Evening Standard 'The Swedish cookbook that's about to set your world - ok - your dinner on fire' - Esquire Magazine
Visa hela texten

Officially Niklas Ekstedt is a chef - and an exceptionally good one - but a better description may be alchemist... Ekstedt employs fire in all its forms to conjure up miracles using leaves, roots and berries (not just meat) and his cooking is as much about philosophy as it is flavour. This incredible book delivers the message of both and is pure porn for pyros. -- Paul Henderson * GQ Magazine * [Niklas'] passion is contagious... The results of Ekstedt's prolific research is evident in his recipes. Wild ingredients and ancient techniques are used to create clean and highly finessed plates of food... This is a book for the enthusiast and it will not disappoint. -- Emma Lake * The Caterer *

After stints at some of the world's best restaurants, Niklas went back to his Scandinavian roots and founded the Michelin-starred Ekstedt in Stockholm, bringing innovative Nordic cooking to the world. The award-winning restaurant uses only Scandinavian wood in their magnificent fire pit or their wood-fired oven, giving the food a truly unique character. Niklas is often travelling, whether it's hosting a long table banquet at Wilderness Festival, or presenting on Swedish prime-time television. He has also appeared on Saturday Kitchen and MasterChef, and has published a number of cookbooks. He lives outside Stockholm with his wife and two children. @niklasekstedt