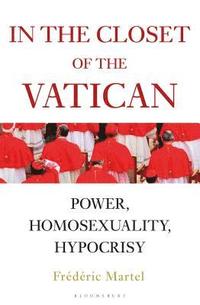 In the Closet of the Vatican

av Frederic Martel
Inbunden Engelska, 2019-02-21
239
Köp
Spara som favorit
Skickas inom 5-8 vardagar.
Fri frakt inom Sverige för privatpersoner.
Finns även som
Visa alla 3 format & utgåvor
The New York Times Bestseller '[An] earth-shaking expose of clerical corruption' - National Catholic Reporter In the Closet of the Vatican exposes the rot at the heart of the Vatican and the Roman Catholic Church today. This brilliant piece of investigative writing is based on four years' authoritative research, including extensive interviews with those in power. The celibacy of priests, the condemnation of the use of contraceptives, the cover up of countless cases of sexual abuse, the resignation of Benedict XVI, misogyny among the clergy, the dramatic fall in Europe of the number of vocations to the priesthood, the plotting against Pope Francis - all these issues are clouded in mystery and secrecy. In the Closet of the Vatican is a book that reveals these secrets and penetrates this enigma. It derives from a system founded on a clerical culture of secrecy which starts in junior seminaries and continues right up to the Vatican itself. It is based on the double lives of priests and on extreme homophobia. The resulting schizophrenia in the Church is hard to fathom. But the more a prelate is homophobic, the more likely it is that he is himself gay. 'Behind rigidity there is always something hidden, in many cases a double life'. These are the words of Pope Francis himself and with them the Pope has unlocked the Closet. No one can claim to really understand the Catholic Church today until they have read this book. It reveals a truth that is extraordinary and disturbing.
Visa hela texten

[An] earth-shaking expose of clerical corruption [...] What Martel does, quite masterfully, is to connect the dots that reveal an ecclesial system in profound decay [...] In the Closet of the Vatican examines in impressive detail the double lives led by many of the church's prelates [...] Without question, [the book] is a truly remarkable publishing event * National Catholic Reporter [US] * A truly shocking theory about the Vatican; the largest gay community in the world * Il Giornale [Italy] * I urge every Catholic to read it, however difficult that may be [...] The book did not surprise me, as such, but it still stunned, shocked, and disgusted me. You simply cannot unread it, or banish what is quite obviously true from your mind [...] This may seem like hyperbole, but in my view, the last drops of moral authority the Vatican might hope to have evaporate with this book. * Andrew Sullivan, New York Magazine * Probably one of the best books by a journalist ever written * Gazeta Wyborcza [Poland] * Martel's conversational style is that of the raconteur [...] he tells a captivating story * Catholic Herald * Stunned may be a much-overused word, but it's the best one I know to describe my wonderment at the dimensions of what has come into view [...] All this builds up to the realisation that you are seeing something which, once seen cannot be unseen. By anyone who has seen it. Once it is seen, it is known as a fact about the Church's institutional working that cannot be got around. To pretend otherwise is a sign of delusion. * James Alison, ABC.net.au * A glimpse of the poisonous world that Frederic Martel, himself gay, has spent five years researching for this book * Andrew Brown, Guardian * An important revelation * Daily Telegraph * Sensational ... this is much, much more than an expose of some taffeta-clad hypocrites...fascinating * Sunday Times * Explosive ... Pope Francis seems to be ... determined to reform the Vatican ... If Martel's book proves anything, it is that this is now seriously overdue ... It would be a mistake to rubbish this book ... [Martel is] a highly intelligent and honest journalist and the Church will need courage to respond to his revelations fruitfully * The Tablet * A remarkable feat of investigation ... Any friend of the Roman Catholic Church needs to take this book's message seriously * Diarmaid MacCulloch, The Times * When God died, the official cause was elderly enfeeblement; after reading Frederic Martel's expose of infamy in the Catholic church, I suspect that the old boy committed suicide in remorse, aghast at the crimes and un-Christian sins of organised religion * Observer *

Frederic Martel (PhD) is a French writer and researcher. He is also a journalist for French national radio and the author of ten books, which have been translated and published in more than 25 countries. He lives in Paris. In the Closet of the Vatican is published simultaneously in eight languages.