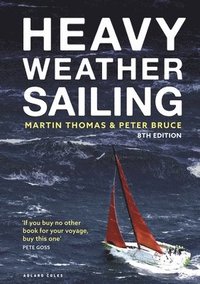 av Martin Thomas, Peter Bruce
Inbunden Engelska, 2022-09-01
470
Köp
Spara som favorit
Finns även som
Visa alla 2 format & utgåvor
For over 50 years Heavy Weather Sailing has been regarded as the ultimate international authority on surviving storms at sea aboard sailing and motor vessels. In this book, former Commodore of the Ocean Cruising Club Martin Thomas brings together a wealth of expert advice from many of the great sailors of the present, including fresh accounts of yachts overtaken by extreme weather, from Ewan Southby-Tailyour, Alex Whitworth and Dag Pike to Larry and Lin Pardey, Matt Sheahan and Andrew Claughton. The expert advice section has been updated in line with current thinking, with major new additions tackling preventing or coping with lightning strikes, navigating in heavy weather with both paper and electronic charts, the choice and use of tenders in severe weather, and special problems faced by the new generation of foiled cruising boats. For the first time the book also covers the unique challenges presented by weather in high latitudes, with more yachts crossing the Drake Passage and attempting the North West Passage. These revisions ensure that Heavy Weather Sailing is as relevant, useful and instructive for today's sailor venturing offshore as it ever was. This is the definitive book for crews of any size contemplating voyages out of sight of land anywhere in the world, whether racing or cruising. It gives a clear message regarding the preparations required, and the tactics to consider when it comes on to blow.
Visa hela texten

If you buy no other book for your voyage, buy this one. * Pete Goss * This book is an institution. * Practical Boat Owner * The ultimate survival handbook. * Yachting World * A book written by experts. I would strongly recommend it to anyone who finds themselves irresistibly drawn towards the sea. It should be on every offshore yacht sailor's list of must-read books. -- Paul Boissier, RNLI Chief Executive * Lifeboat * The latest edition of [the] classic ... skulfully edited by Martin Thomas and Peter Bruce, who have brought their own wealth of experience. An instructive read. -- Paul Heiney * Sailing Today * Essential reading for every sailor. * Yachting Monthly * The bible on surviving storms at sea. This has always been an invaluable book for offshore sailors. Highly recommended. * Sailing Today * First-hand tales of extreme weather and storm conditions with expert reflection and advice...essential reading for every sailor. * Yachting Monthly * Everyone who goes on the sea should read it. * The Marine Quarterly *

Martin Thomas is the former Commodore of the Ocean Cruising Club, and is currently the Vice-Commodore of the Royal London Yacht Club. He was previously the Watch Officer on board the sail training schooner Sir Winston Churchill. A distinguished surgeon, he has written on topics of emergencies at sea and medical treatment for yachtsmen. Peter Bruce served in the Royal Navy for many years, and continues to spend much time at sea, cruising, researching his pilot books or racing. He is one of the top Corinthian skippers in the world, has twice been part of Britain's winning Admiral's Cup team and has taken part with distinction in most Fastnet races since his first in 1961.