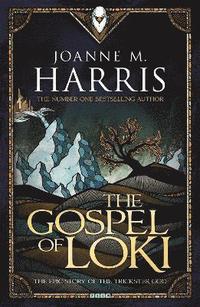 The Gospel of Loki

av Joanne Harris
Häftad Engelska, 2015-06-04
127
Köp
Spara som favorit
Finns även som
Visa alla 5 format & utgåvor
The beautifully lyrical retelling of the Norse myths, told from the captivating point of view of the trickster god Loki The novel is a brilliant first-person narrative of the rise and fall of the Norse gods - retold from the point of view of the world's ultimate trickster, Loki. It tells the story of Loki's recruitment from the underworld of Chaos, his many exploits on behalf of his one-eyed master, Odin, through to his eventual betrayal of the gods and the fall of Asgard itself. Using her life-long passion for the Norse myths, Joanne Harris has created a vibrant and powerful fantasy novel. Readers are captivated by The Gospel of Loki: 'A perfect introduction for the uninitiated . . . Apart from being original, funny and engaging, The Gospel of Loki is also brilliantly written . . . It's a delight to read' Goodreads reviewer, 'I've always been a fan of the antihero. While I cannot approve of everything that Loki did, he comes off the page as genuinely sympathetic and, dare I say -- human?' Goodreads reviewer, 'Harris manages to make you understand Loki, loathe those Gods who are mean to him, and root for Loki to succeed in his plans . . . I can advice this book to everyone who loves retellings of old myths' Goodreads reviewer, 'Well once again, Joanne Harris blows me away. What a brilliantly entertaining version of Norse mythology' Goodreads reviewer, 'The tone is perfectly witty without being too funny for suspense. The banter and humour just clicked with me and I smiled, grinned and snorted my way all through the book' Goodreads reviewer, 'If you love mythology and are interested in learning about the Norse Gods, I highly recommend' Goodreads reviewer,
Visa hela texten

a fun read, and a nice new slant on the old tales * Fortean Times * Allan Corduner's charming voicing of our antihero makes us sympathise with him more than we ought to; imaginative accents for the huge cast of gods, giants and demons, and splendid musical effects add to the fun" * THE TIMES * A chatty, cheeky style that works a treat * SFX * Moves at a cracking pace and it's a lot of fun -- Jonathan Hatfull * SciFiNow * A beautifully written darkly fun fairy tale which breathes new life into the Trickster * GEEK PLANET ONLINE * An ingeniously skewed retelling of Norse mythology. It's fun and you'll keep going to the end. -- Callum Shephard * Starburst Magazine * A surprise from the author of Chocolat, this pacy adult fantasy is narrated by Loki, the Norse god of fire and mischief. -- Violent Henderson * Vogue * quirky, amusing throughout, with an undercurrent of darkness and menace. This is a lot of fun...A must-read for all fans of Norse legends, fantasy and great writing. -- Stefan Fergus * Civilian Reader * The type of book where you've gone through fifty pages and are still hungry for more...a joyous, terrifying, tumulutuous ride. And there's undoubtedly more to come. -- Chris Nickson * Chris Nickson * Harris is an expert of Norse mythology...she makes it into a compelling subject matter that encourages the revisiting of these historic tales. -- Joe Warren * Fantasy Book Review * Loki's unique narration brings the myths to life with a grounded and modern take on the traits of the gods of Asgard -- Daniel Liscombe * Utter Biblio * Fun, witty and wholly entertaining, this is a neat retelling of classic legends which maintains their ancient roots without diminishing them in any way through the use of a modern filter -- Matt Adams * Herts Advertiser * It could have been a stuffy book about the myths and legends of Scandinavia, but with a brilliantly clever twist of Loki as the narrator, and his wonderful sense of wit, it both teaches and entertains * Rinn Reads * Harris narrative is witty and nicely-paced...The book will appeal to fans of folklore and mythology, but also, I'm sure, to fans of Loki from the marvels movies * Nicki J Markus Blog * Loki's voice is engaging, witty and likeable...Loki's famous exploits are conveyed with humour and verve * Lucy Hounsom Blog * It has the right amount of epic fantasy and tongue-in-cheek humour....Harris skillfully weaves the stereotypical evil Loki into a self-aware but misunderstood antihero...a wonderful piece by a wonderful author, Well worth your time. * The Tempered Pen * Joanne is a natural storyteller who knows a few things about comedy timing...I was snorting with laughter in a most unladylike manner before even emerging from the cast list -- Ani Johnson * THE BOOK BAG * Joanne M Harris brings her fascination with norse mythology from her previous children's literature foray to her long-standing adult audience with wit, style and obvious enjoyment...For lovers of myth, legend and Game of Thrones * Sunday Sun * utterly compelling and well worth a read * BURY FREE PRESS * dark, quirky, occasionally grim, often hilarious and gloriously bold * Booktopia * This book is about playfulness and trickery and their darkside...there is a sly humour to this novel - both the narrator's and at his expense * THE INDEPENDENT * a rich, sexy and entertaining tale of Loki...an imaginative retelling of the old myths, as seen through the eyes of the bad guy, and Harris (she reads Old Norse) handles it brilliantly! * SAGA * the first foray into adult fantasy fiction by the author of Chocolat is lively and fun * THE SUNDAY TIMES * Harris has enormous fun with her antihero...this mythical bad boy should beguile fans of Neil Gaiman * THE METRO * retells the sagas for adults, in all their wintry, saucy, grandiose, melancholy glory. * THE FINANCIAL TIMES * An ingenious and funny retelling of the rise and fall of the Norse gods * CHOICE * fantasy fans and those who like to read Norse myths will appre

JOANNE HARRIS is an Anglo-French author, whose books include fourteen novels, two cookbooks and many short stories. Her work is extremely diverse, covering aspects of magic realism, suspense, historical fiction, mythology and fantasy. In 2000, her 1999 novel CHOCOLAT was adapted to the screen, starring Juliette Binoche and Johnny Depp. She is an honorary Fellow of St Catharine's College, Cambridge, and in 2013 was awarded an MBE by the Queen.