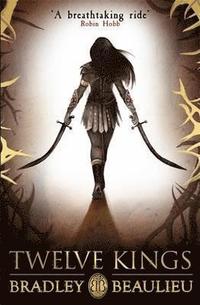 The Song of the Shattered Sands

av Bradley Beaulieu
(1 röst)
Häftad Engelska, 2016-06-09
149
Köp
Spara som favorit
Fåtal ex i lager. Skickas inom 1-3 vardagar.
Fri frakt inom Sverige över 159 kr för privatpersoner.
Kan levereras innan jul!
Finns även som
Visa alla 1 format & utgåvor
In the cramped west end of Sharakhai, the Amber Jewel of the Desert, Ceda fights in the pits to scrape a living. She, like so many in the city, pray for the downfall of the cruel, immortal Kings of Sharakhai, but she's never been able to do anything about it. This all changes when she goes out on the night of Beht Zha'ir, the holy night when all are forbidden from walking the streets. It's the night that the asirim, the powerful yet wretched creatures that protect the Kings from all who would stand against them, wander the city and take tribute. It is then that one of the asirim, a pitiful creature who wears a golden crown, stops Ceda and whispers long forgotten words into her ear. Ceda has heard those words before, in a book left to her by her mother, and it is through that one peculiar link that she begins to find hidden riddles left by her mother. As Ceda begins to unlock the mysteries of that fateful night, she realizes that the very origin of the asirim and the dark bargain the Kings made with the gods of the desert to secure them may be the very key she needs to throw off the iron grip the Kings have had over Sharakhai. And yet the Kings are no fools-they've ruled the Shangazi for four hundred years for good reason, and they have not been idle. As Ceda digs into their past, and the Kings come closer and closer to unmasking her, Ceda must decide if she's ready to face them once and for all.
Visa hela texten

A grand tapestry of a fantasy * BRITISH FANTASY SOCIETY * Overall this is a incredulously well thought out Fantasy Adventure that keeps you on the edge of your seat, turning pages and keeping you up late into the night. It flows enticingly, with ease, for a story with so much detail and depth. Not at one point was I bored but allured as these pages are full of twists and unexpected turns, mini cliff hangers that keep you on the edge of your seat, mystery that keeps you intrigued and your mind ticking and failing that a good old scrap in the pits. * The Fantasy Book Collector * a breathtaking setting, a marvellously twisty plot, more intrigue than you can shake a stick at, and a cleverly drawn, strong protagonist to follow through it all. * Overtheeffingrainbow.co.uk * This looks like the beginnings of a terrific new fantasy series, one that works largely within the accepted conventions, but finds a wealth of imaginative ways to build something new within it. * The Digital Fix * Twelve Kings blends together action and adventure with political intrigue to create a wonderfully engrossing hybrid. Well rounded characterisation and an enthralling plot are elevated further by some truly effective world-building. Fans of epic fantasy are going to get a real kick out of this. * The Eloquent Page * This is a series that will enthral me and many others for some time to come im sure.... another clear winner for Gollancz and a bright start for Beaulieu...bring on book 2 * Parmenion Books * Fantasy and horror, catacombs and sarcophagi, resurrections and revelations: The book has them all, and Beaulieu wraps it up in a package that's as graceful and contemplative as it is action-packed and pulse-pounding. * NPR.org * Beaulieu has created something altogether vivid and perfectly natural...Though Twelve Kings ends its narrative at a suitable point to stop and draw breath, I'm eager to read the next installment and disappointed that I will have to wait another year to do so. * Forbidden Planet International * I loved this book, want more of Ceda and I am fascinated by this world and its mythology (hint: I want to learn more about the Twelve Kings themselves). * SFF World * an incredibly well crafted traditional fantasy...Beauliey is excellent at keeping a tight rein on the moment-to-moment action and building up the tension and layers of mysteries. * Sci-Fi Now * Bradley Beaulieu builds a complex world around the city state - it's just as alive and characters, a fascinating fantasy realm that you'll wish you could visit. Ceda herself is much like the city: fiery and complicated * SFX * A positively gripping opening, a wonderful story, vivid setting and an equally gripping finale. Bring on No.2 please....I have no hesitation in recommending this book to readers of epic fantasy - it's simply wonderful and compelling to read. * Lynns Books * A beautiful richly imagined story that will end high in my top 2015 list for sure. * The Book Plank * Twelve Kings is a beautifully rich, absorbing novel, the beginning of a promising epic fantasy series. * SF Book * it all makes for what is probably going to be one of THE fantasy books of the year and a series that will surely be up there with the Big Boys * Terror Tree * A lavish epic featuring gods, gangs, gladiators and everything in-between. With its deliciously original magic system, vast new world, reckless heroine and sinister array of ageless villains, this is a must for fans of Brandon Sanderson -- Jared Shurin * Pornokitsch * Brad Beaulieu's Twelve Kings in Sharakai isn't the same as the last epic fantasy you read. Like the desert sands of Sharakhai, this first volume of Beaulieu's new series is a constantly shifting narrative of betrayal and friendship, loyalty and vengeance. Leave the farm boys to their chickens and the scullions to their pots, because Ceda's bringing a knife to this fight. It's vivid and diverse, full of complex relationships, eye-opening magic, and world building for this new a

Bradley Beaulieu is the acclaimed author of THE WINDS OF KHALAKOVO trilogy, and has been singled out as a writer to watch, having honed his craft working with authors including Holly Black, Tim Powers and Nancy Kress. He lives and works in the US, and you can follow @bbeaulieu on twitter.