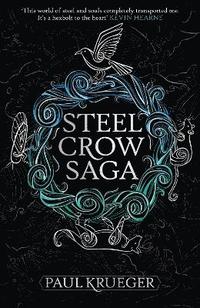 av Paul Krueger
Häftad Engelska, 2020-06-25
127
Köp
Spara som favorit
Finns även som
Visa alla 4 format & utgåvor
A soldier with a curse Tala lost her family to the empress's army and has spent her life avenging them in battle. But the empress's crimes don't haunt her half as much as the crimes Tala has committed against the laws of magic . . . and her own flesh and blood. A prince with a debt Jimuro has inherited the ashes of an empire. Now that the revolution has brought down his kingdom, he must depend on Tala to bring him home safe. But it was his army who murdered her family. Now Tala will be his redemption - or his downfall. A detective with a grudge Xiulan is an eccentric, pipe-smoking detective who can solve any mystery - but the biggest mystery of all is her true identity. She's a princess in disguise, and she plans to secure her throne by presenting her father with the ultimate prize: the world's most wanted prince. A thief with a broken heart Lee is a small-time criminal who lives by only one law: Leave them before they leave you. But when Princess Xiulan asks her to be her partner in crime - and offers her a magical animal companion as a reward - she can't say no, and soon finds she doesn't want to leave the princess behind. This band of rogues and royals should all be enemies, but they unite for a common purpose: to defeat an unstoppable killer who defies the laws of magic. In this battle, they will forge unexpected bonds of friendship and love that will change their lives - and begin to change the world.
Visa hela texten

This world of steel and souls completely transported me. It's a hexbolt to the heart, and I can't wait to read whatever Krueger writes next * Kevin Hearne * A rollicking adventure that wears its heart on its sleeve, and a joyful ode to its anime influences, Steel Crow Saga will immerse you in both the rich, complex world Paul Krueger has masterfully built and the intimate, equally complex inner struggles of its instantly lovable characters * Emily Skrutskie * An incredible voice, an amazing conflict, and a hot mess of emotions. Krueger has taken one earth-shattering step and a thousand stories will grow in his footprint * Sam Sykes * With fierce women, ferocious creatures, and a sophisticated twist, Steel Crow Saga is the fantasy epic you didn't know you needed, creating a rich new mythology and characters so real you can smell their pipe smoke and adobo * Delilah S. Dawson, New York Times bestselling author of Star Wars: Phasma * Pokemon combined with Avatar: The Last Airbender . . . clever, stylish and gloriously fun * Fonda Lee, author of Jade City * A post-colonial fantasy that draws on Japanese, Chinese, Korean, and Filipino cultures for a multinational tale of political intrigue. . . . This Asian-influenced sociopolitical drama explores the complications that ensue after the war, when no one's hands are clean. Characters face the consequences of the choices they made during the conflict and consider whether it's possible to rise above deeply ingrained prejudices and forge alliances with former enemies. Such grave matters are leavened by amusing banter, solid action, and two charming nascent romances of opposites. As tasty as the mushroom adobo that appears in the book both as food and metaphor. * Kirkus (starred review) * It's only Paul Krueger's second book and already he's writing fantasy like a master. Steel Crow Saga is fun, funny, thrilling, heartbreaking, and, above all else, something only Krueger could've written * Chuck Wendig, New York Times bestselling author * Starts with a bang and never slows down . . . Think Pokemon meets The Northern Lights, with plenty of original and frightening twists along the way * BookPage *

Paul Krueger is a Filipino-American author. His first novel was the urban fantasy Last Call at the Nightshade Lounge, followed by the critically acclaimed stand-alone fantasy Steel Crow Saga. A lapsed Chicagoan, he may now be found literally herding cats in Los Angeles.