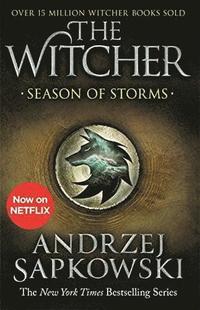 A Novel of the Witcher - Now a major Netflix show

av Andrzej Sapkowski
Häftad Engelska, 2020-02-11
99
Köp
Spara som favorit
Skickas inom 7-10 vardagar.
Fri frakt inom Sverige över 159 kr för privatpersoner.
Finns även som
Visa alla 3 format & utgåvor
Before he was Ciri's guardian, Geralt of Rivia was a legendary swordsman. Season of Storms is an adventure set in the world of the Witcher, the book series that inspired the hit Netflix show and bestselling video games. Geralt. The witcher whose mission is to protect ordinary people from the monsters created with magic. A mutant who has the task of killing unnatural beings. He uses a magical sign, potions and the pride of every witcher - two swords, steel and silver. But what would happen if Geralt lost his weapons? Andrzej Sapkowski returns to his phenomenal world of the Witcher in a stand-alone novel where Geralt fights, travels and loves again, Dandelion sings and flies from trouble to trouble, sorcerers are scheming ... and across the whole world clouds are gathering. The season of storms is coming... Translated by David French.
Visa hela texten

Like Mieville and Gaiman, Sapkowski takes the old and makes it new - FOUNDATION An incredibly nuanced, well-articulated novel, imbued with a self-assured command of description and brimming with Eastern European folklore - Starburst on Time of Contempt Delightfully dry humour, mythology brimming with radical creatures and a group of interesting characters - Fantasy Book Review One of the best and most interesting fantasy series I've ever read - Nerds of a Feather There's lots of imagination on show, the writing has a strong voice, and the Witcher is an entertaining character - Mark Lawrence

Andrzej Sapkowski was born in 1948 in Poland. He studied economy and business, but the success of his fantasy cycle about the Witcher Geralt of Rivia turned him into a bestselling writer and he is now one of Poland's most famous and successful authors, selling more in his own country than Stephen King or Michael Crichton.