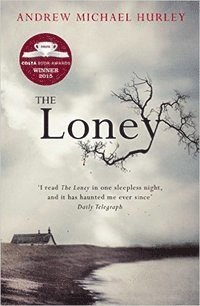 av Andrew Michael Hurley
(6 röster)
Häftad Engelska, 2016-04-07
129
Köp
Spara som favorit
Skickas inom 10-15 vardagar.
Fri frakt inom Sverige över 159 kr för privatpersoner.
Kan tyvärr inte längre levereras innan jul.
THE SUNDAY TIMES TOP 10 BESTSELLER. WINNER OF THE 2015 COSTA FIRST NOVEL AWARD. THE BRITISH BOOK AWARDS BOOK OF THE YEAR 2016. A brilliantly unsettling and atmospheric debut full of unnerving horror - 'The Loney is not just good, it's great. It's an amazing piece of fiction' Stephen King Two brothers. One mute, the other his lifelong protector. Year after year, their family visits the same sacred shrine on a desolate strip of coastline known as the Loney, in desperate hope of a cure. In the long hours of waiting, the boys are left alone. And they cannot resist the causeway revealed with every turn of the treacherous tide, the old house they glimpse at its end . . . Many years on, Hanny is a grown man no longer in need of his brother's care. But then the child's body is found. And the Loney always gives up its secrets, in the end. 'This is a novel of the unsaid, the implied, the barely grasped or understood, crammed with dark holes and blurry spaces that your imagination feels compelled to fill' Observer 'A masterful excursion into terror' The Sunday Times
Visa hela texten

A haunting exploration of religion, faith and family. Hurley's evocation of the landscape is bleak and beautiful, while his portrayal of a family slowly imploding is both perceptive and compelling * Sunday Express summer reads * A masterclass in spinning out tension * Financial Times * A tale of suspense that sucks you in and pulls you under. As yarns go, it rips * New Statesman * A haunting and ambiguous novel that will keep you up at night * Daily Express * An unforgettable addition to the ranks of the best British horror * Metro * An eerie, disturbing read that doesn't let up until its surprise ending * Daily Mail * Written with the skill of a poet * The Times, Books of the Year * This is a novel of the unsaid, the implied, the barely grasped or understood, crammed with dark holes and blurry spaces that your imagination feels compelled to fill * Observer * An extraordinarily haunted and haunting novel * Daily Telegraph * A masterful excursion into terror * Sunday Times * Here is the masterpiece by which Hurley must enter the Guild of the Gothic: it pleases me to think of his name written on some parchment scroll, alongside those of Walpole, Du Maurier, Maturin and Jackson * Guardian * An amazing piece of fiction * Stephen King *

Andrew Michael Hurley has lived in Manchester and London, and is now based in Lancashire, where he teaches English Literature and Creative Writing. He has had two collections of short stories published by Lime Tree Press. The Loney is his first novel - it was first published in October 2014 by Tartarus Press, a tiny independent publisher based in Yorkshire, as a 300-copy limited-edition.