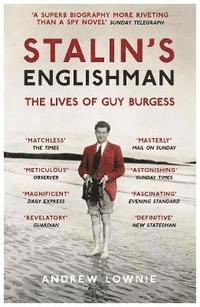 av Andrew Lownie
Häftad Engelska, 2016-06-02
139
Köp
Spara som favorit
Skickas inom 5-8 vardagar.
Gratis frakt inom Sverige över 159 kr för privatpersoner.
Finns även som
Visa alla 1 format & utgåvor
Winner of the St Ermin's Intelligence Book of the Year Award. 'One of the great biographies of 2015.' The Times Fully updated edition including recently released information. A Guardian Book of the Year. The Times Best Biography of the Year. Mail on Sunday Biography of the Year. Daily Mail Biography of Year. Spectator Book of the Year. BBC History Book of the Year. 'A remarkable and definitive portrait ' Frederick Forsyth 'Andrew Lownie's biography of Guy Burgess, Stalin's Englishman ... shrewd, thorough, revelatory.' William Boyd 'In the sad and funny Stalin's Englishman, [Lownie] manages to convey the charm as well as the turpitude.' Craig Brown Guy Burgess was the most important, complex and fascinating of 'The Cambridge Spies' - Maclean, Philby, Blunt - all brilliant young men recruited in the 1930s to betray their country to the Soviet Union. An engaging and charming companion to many, an unappealing, utterly ruthless manipulator to others, Burgess rose through academia, the BBC, the Foreign Office, MI5 and MI6, gaining access to thousands of highly sensitive secret documents which he passed to his Russian handlers. In this first full biography, Andrew Lownie shows us how even Burgess's chaotic personal life of drunken philandering did nothing to stop his penetration and betrayal of the British Intelligence Service. Even when he was under suspicion, the fabled charm which had enabled many close personal relationships with influential Establishment figures (including Winston Churchill) prevented his exposure as a spy for many years. Through interviews with more than a hundred people who knew Burgess personally, many of whom have never spoken about him before, and the discovery of hitherto secret files, Stalin's Englishman brilliantly unravels the many lives of Guy Burgess in all their intriguing, chilling, colourful, tragi-comic wonder.
Visa hela texten

Fine biography, packed with detail...impressive primary and secondary reasearch * Wall Street Journal * A superb biography, the quality of which is unlikely tobe surpassed. * Intelligence & National Security * A crack biography of a man who was a preposterous enigma. * Kirkus * Stalin's Englishman is a fine biography about an effective spy and a disgraceful traitor who lived to enjoy Communist reality firsthand. It fills a major historical gap in espionage history. * Studies in Intelligence * A fascinating book, enlivened by many new sources and the results of painstaking interviews. -- Edward Towne * The Historian * An extremely well-written biography...an astonishing piece of research. * Sunday Times * Lownie brilliantly chronicles the life of the man at the centre of the Cambridge spy ring. * Guardian * A superb biography... full of detail, meticulously sifted by the author, and it's also engrossing and exciting. We are transported into the past with real skill... Brilliantly told. * Evening Standard * Stalin's Englishman comes as close to touching the tortured and tempestuous soul of Guy Burgess as anything I have read. It's superbly researched and written with an extraordinary elegance that takes you by the hand and guides you along the pathways of outrageous treachery. Truly exceptional. * Michael Dobbs * I loved it. Beautifully written and riveting from start to finish. Also very funny. -- Piers Brendon * author of Ike: His Life and Times and The Dark Valley: A Panorama of the 1930s * Almost from the moment he skipped the country Guy Burgess has been the subject of biographers, from early journalists' hastily assembled clippings, via the academic study, to 'Stalin's Englishman' - the first 'life' that captures the man fully ... the decadent, the drunkard, the outrageous sex bandit ... and above the all the first life to reveal the full extent of Burgess's treason. Andrew Lownie's book will be definitive for years to come. -- John Lawton * author of the Inspector Troy series * Above all, this is a gripping study of a most unusual personality, written with compassion but without sentimentality. It is detailed, and impeccably sourced...Reminiscent of early John le Carre, this is a book to be relished with a glass of whisky at one's side - or should that be vodka? Highly recommended. * Marius Gabriel * ...a masterly and penetrating study of this strange man, the rich well-connected brilliant Cambridge scholar, who was a seriously dangerous agent for the Soviet Union from the 1930s until he fled with Maclean in 1951. -- Michael Hartland * author Seven Steps to Treason * This is a must-read for anyone at all interested in espionage. The definitive and revelatory biography of one of the greatest traitors of the Cold War. -- Jeremy Duns * author of the Paul Dark spy series and Codename:Hero: The True Story of Oleg Penkovsky and the Cold War's Most Dangerous Operation * A hugely entertaining read about one of the most notorious spies ever. Eric Ambler couldn't have provided a more fascinating story. * Philip Kerr * Stalin's Englishman tells the outrageous story of a master manipulator and trickster, and evaluates his treason with a vigour that made it one of the great biographies of 2015. * The Times * A remarkable and definitive portrait of the truly ghastly spy and traitor Guy Burgess who should surely never have been permitted to do us so much damage. And a portrait of the snobbery and laxity that permitted an Old Etonian who had changed sides to get away with it for so long. * Frederick Forsyth * An astonishing, unique story. * Sarah Bradford, The Tablet * An impeccably researched biography, but also as an in-depth cultural study and a spy thriller of genuine, knuckle-gnawing tension. * The Independent * Lownie's book successfully rescues Burgess from the image he is sometimes given, as little more than a drunken buffoon...a meticulous account of Burgess's life and makes a useful contribution to Cold War intelligen

Andrew Lownie first became interested in the Cambridge Spy Ring when, as President of the Cambridge Union Society in 1984, he arranged an international seminar on the subject. After graduating from Cambridge University, where he won the Dunster Prize for History, Lownie went on to take a postgraduate degree in history at Edinburgh University. He is now a successful literary agent, and has written or edited seven books, including a biography of John Buchan.