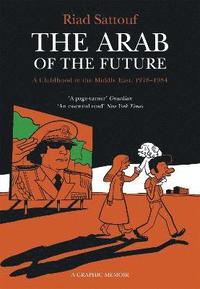 The Arab of the Future

av Riad Sattouf
(1 röst)
Häftad Engelska, 2016-04-07
229
Köp
Spara som favorit
Kan tyvärr inte längre levereras innan julafton.
Finns även som
Visa alla 1 format & utgåvor
VOLUME 1 IN THE UNFORGETTABLE STORY OF AN EXTRAORDINARY CHILDHOOD The Arab of the Future tells the unforgettable story of Riad Sattouf's childhood, spent in the shadows of three dictators - Muammar Gaddafi, Hafez al-Assad, and his father. A GUARDIAN BOOK OF THE YEAR | AN OBSERVER GRAPHIC BOOK OF THE YEAR | A NEW YORK TIMES CRITICS' TOP BOOK OF THE YEAR 'I tore through it... The most enjoyable graphic novel I've read in a while' Zadie Smith 'I joyously recommend this book to you' Mark Haddon 'Riad Sattouf is one of the great creators of our time' Alain De Botton 'Beautifully-written and drawn, witty, sad, fascinating... Brilliant' Simon Sebag Montefiore In a striking, virtuoso graphic style that captures both the immediacy of childhood and the fervour of political idealism, Riad Sattouf recounts his nomadic childhood growing up in rural France, Gaddafi's Libya, and Assad's Syria - but always under the roof of his father, a Syrian Pan-Arabist who drags his family along in his pursuit of grandiose dreams for the Arab nation. Riad, delicate and wide-eyed, follows in the trail of his mismatched parents: his mother, a bookish French student, is as modest as his father is flamboyant. Venturing first to the Great Socialist People's Libyan Arab State and then joining the family tribe in Homs, Syria, they hold fast to the vision of the paradise that always lies just around the corner. And hold they do, though food is scarce, children kill dogs for sport, and with locks banned, the Sattoufs come home one day to discover another family occupying their apartment. The ultimate outsider, Riad, with his flowing blond hair, is called the ultimate insult... Jewish. And in no time at all, his father has come up with yet another grand plan, moving from building a new people to building his own great palace. Brimming with life and dark humour, The Arab of the Future reveals the truth and texture of one eccentric family in an absurd Middle East, and also introduces a master cartoonist in a work destined to stand alongside Maus and Persepolis. Translated by Sam Taylor. 'ENGROSSING' New York Times 'A PAGE TURNER' Guardian 'MARVELLOUS... BEGS TO BE READ IN ONE LONG SITTING' Herald 'AN OBJECT OF CONSENSUAL RAPTURE' New Yorker 'ONE OF THE GREATEST CARTOONISTS OF HIS GENERATION' Le Monde
Visa hela texten

I tore through two volumes of The Arab of the Future, by Riad Sattouf - it's the most enjoyable graphic novel I've read in a while * Zadie Smith * This is a masterpiece that deserves the widest readership. The Arab Of The Future reminds us that, in talented hands, graphic novels are capable of carrying the weightiest themes, making us think, and touching our hearts while also keeping us hugely entertained. Riad Sattouf is one of the great creators of our time' * Alain De Botton * The Arab of the Future is wonderfully observed, funny, grim, sharp and sad. Riad Sattouf, with his ear for anecdote, his nimble drawing and his understanding of human frailty, has created a masterpiece. * Posy Simmonds * I joyously recommend this book to you. You will be moved, entertained and edified. Often simultaneously * Mark Haddon * Beautifully-written and drawn, witty, sad, fascinating... Brilliant * Simon Sebag Montefiore * Riad Sattouf's poignant memoir is the record of a single, unique life, but it's one of those 'single windows' through which the world is made newly visible. It's worth a shelf full of books about identity politics, history or political science. * Hari Kunzru * Sattouf experienced both Gaddafi's Libya and Hafez al-Assad's Syria while still a small boy. Kids don't spend a lot of time reflecting on totalitarianism, but they do form strong impressions. His simple depictions of living in an almost-abandoned building for expatriates in Libya, or of watching Assad praying on TV are the kind of banal micro-details that would lose their significance in written prose. Captured in the panels of a cartoon strip, however, they attain a luminous resonance that lingers long after you've finished the book. * Guardian * Not since Persepolis, Marjane Satrapi's graphic memoir of revolutionary Iran, has a comic book seemed so important, or been so acclaimed... There is a feeling that the book throws some light both on the roots of the Arab spring, and what has happened since. In a country - and beyond it, a world - in which bewilderment and anxiety at recent events polarises communities as often as it unites them, it has an authenticity with which no expert or talking head could ever hope to compete. * Observer * Excellent... The graphic novel has proved itself again and again. It already has its canon: Art Spiegelman on the Holocaust, Marjane Satrapi on girlhood in Islamist Iran, and, perhaps most accomplished of all, Joe Sacco's Footnotes in Gaza, a work of detailed and self-reflexive history. Edging towards this company comes Riad Sattouf's childhood memoir of tyranny... It's this sort of detail, drawn with the cartoon clarity of childhood perception, that makes the book such a success... The Arab of the Future is an authentic, emotionally honest memoir, and much more useful background reading for present events than a romanticised account of cosmopolitan, bourgeois Damascus would be. * Guardian * Marvellous... Sattouf records it all in an endearing cartoony style, his clean lines enhanced by discreet colour shading to indicate which country they're living in at the time. His comic timing is immaculate, but there's always an edge to his humour. Packing a host of unforgettable scenes, The Arab of the Future begs to be read in one long sitting. * Herald (Paperback of the Week) * Riad Sattouf's shockingly blunt The Arab of the Future, which tells the story of the French cartoonist's itinerant childhood in the Middle East, is a must for anyone who wants to understand more about the failure of the pan-Arab dream, with all the consequences this has had for the situation in which we now find ourselves. It's also a page-turner, dissecting as it does the psychology of a man (Riad's Syrian father) whose increasingly deluded idealism results in a form of tyranny when it comes to his own family. * Guardian (Best Graphic Books of 2015) * Captivating, compelling, informative and an amazing read... Using his voice as a child, Saffouf deals with the topics

RIAD SATTOUF is a bestselling cartoonist and filmmaker who grew up in Syria and Libya and now lives in Paris. The author of four comics series in France and a former contributor to the satirical publication Charlie Hebdo, Sattouf is now a weekly columnist for l'Obs. He also directed the films The French Kissers (winner of a Cesar Award for Best First Film) and Jacky in the Women's Kingdom. The Arab of the Future - which was awarded the Fauve d'Or Prize for Best Album of the Year at the Angouleme International Comics Festival and has been translated into twenty languages - is his first work to appear in English. riadsattouf.com @RiadSattouf