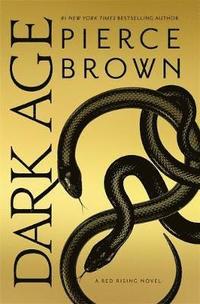 av Pierce Brown
(2 röster)
Inbunden Engelska, 2019-02-12
189
Bevaka
Spara som favorit
Tillfälligt slut – klicka "Bevaka" för att få ett mejl så fort boken går att köpa igen.
Finns även som
Visa alla 2 format & utgåvor
SUNDAY TIMES BESTSELLER ***The explosive fifth novel in the Red Rising Series*** The Number One New York Times bestselling author of Morning Star returns to the Red Rising universe with the thrilling sequel to Iron Gold. He broke the chains Then broke the world.... A decade ago Darrow led a revolution, and laid the foundations for a new world. Now he's an outlaw. Cast out of the very Republic he founded, with half his fleet destroyed, he wages a rogue war on Mercury. Outnumbered, outgunned but not out thought. Is he still the hero who broke the chains? Or will he become the agent of the world's destruction? Is it time for another legend to take his place? Lysander au Lune, the displaced heir to the old empire, has returned to the Core. First he must survive Gold backstabbing, then Darrow. Will he bring peace to mankind at the edge of his sword? And on Luna, Mustang, the embattled sovereign of the Republic, must save both democracy and her exiled husband millions of kilometres away. The only thing certain in the Solar System is treachery. And that the Rising is entering a new Dark Age. PRAISE FOR THE RED RISING SERIES: 'Pierce Brown's empire-crushing debut is a sprawling vision . . . Ender, Katniss, and now Darrow' - Scott Sigler, New York Times bestselling author of Pandemic '[A] top-notch debut novel . . . Red Rising ascends above a crowded dystopian field' - USA Today '[A] spectacular adventure . . . one heart-pounding ride . . . Pierce Brown's dizzyingly good debut novel evokes The Hunger Games, Lord of the Flies, and Ender's Game. . . . [Red Rising] has everything it needs to become meteoric' - Entertainment Weekly
Visa hela texten

Complex, layered . . . mature science fiction existing within the frame of blazing space opera . . . done in a style [that] borders on Shakespearean. * NPR * Iron Gold offers more of everything we loved about the first three books. Pierce Brown builds upon the foundations of the incredible universe and story he spun in the first trilogy, pivoting on his characters' flaws and fallibility to steer the narrative in unexpected directions. Suffice it to say, readers will be soon be dying to read the next one * Barnes & Noble * This book lives up to every expectation I have for Pierce Brown . . . you MUST read this, it will not disappoint! * The Speculative Herald * 'The books are an exhilarating fusion of The Hunger Games, Blade Runner and Dune. Amid a pulse-pounding narrative, they fearlessly tackle major issues like the fragility of democracy and the fallibility of human nature to betray its ideals even when freedom is attained * Star Magazine * Another sizzling space epic to entice, excite and tease. 5 STARS * Starburst Magazine * Fascinating . . . This is one you absolutely will have to read * The Biblio Sanctum * Praise for IRON GOLD * : * Much like A Song of Ice and Fire's George R. R. Martin, Brown is an author who is interested in exploring the consequences of his protagonist's actions. Revolution doesn't come without a price and no one can stay a hero forever. . . . Dark Age continues the trend of compelling characters, fast plotting, action, and the feeling that no one is truly safe and no one is who you think they are * The Mary Sue * Dark Age proves that Brown has truly become a master * The Geekiary * An epic story of rebellion, social unrest and sacrifice * Orlando Sentinel * Brown's plots are like a depth charge of nitromethane dropped in a bucket of gasoline. His pacing is 100 percent him standing over it all with a lit match and a smile, waiting for us to dare him to drop it * NPR * Praise for DARK AGE * : *

PIERCE BROWN spent his childhood building forts and setting traps for his cousins in the woods of six states and the deserts of two. Graduating college in 2010, he fancied the idea of continuing his studies at Hogwarts School of Witchcraft and Wizardry. Unfortunately, he doesn't have a magical bone in his body. So while trying to make it as a writer, he worked as a manager of social media at a startup tech company, toiled as a peon on the Disney lot at ABC Studios, did his time as an NBC page, and gave sleep deprivation a new meaning during his stint as an aide on a U.S. Senate Campaign. Now he lives in Los Angeles, where he scribbles tales of spaceships, wizards, ghouls, and most things old or bizarre. He is the author of the New York Times bestselling Red Rising series, comprising Red Rising, Golden Son, Morning Star and Iron Gold.