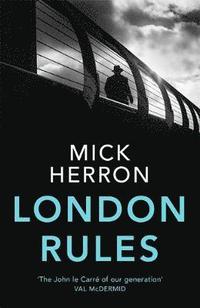 av Mick Herron
Inbunden Engelska, 2018-02-01
289
Köp
Spara som favorit
Skickas inom 7-10 vardagar.
Fri frakt inom Sverige för privatpersoner.
Finns även som
Visa alla 2 format & utgåvor
SHORTLISTED FOR THE CWA GOLD DAGGER AND IAN FLEMING STEEL DAGGER 'The UK's new spy master' Sunday Times London Rules might not be written down, but everyone knows rule one. Cover your arse. Regent's Park's First Desk, Claude Whelan, is learning this the hard way. Tasked with protecting a beleaguered prime minister, he's facing attack from all directions himself: from the showboating MP who orchestrated the Brexit vote, and now has his sights set on Number Ten; from the showboat's wife, a tabloid columnist, who's crucifying Whelan in print; and especially from his own deputy, Lady Di Taverner, who's alert for Claude's every stumble. Meanwhile, the country's being rocked by an apparently random string of terror attacks, and someone's trying to kill Roddy Ho. Over at Slough House, the crew are struggling with personal problems: repressed grief, various addictions, retail paralysis, and the nagging suspicion that their newest colleague is a psychopath. But collectively, they're about to rediscover their greatest strength - that of making a bad situation much, much worse. It's a good job Jackson Lamb knows the rules. Because those things aren't going to break themselves. ****** Praise for Mick Herron 'The new spy master' Evening Standard 'Herron is spy fiction's great humorist, mixing absurd situations with sparklingly funny dialogue and elegant, witty prose' The Times 'Herron draws his readers so fully into the world of Slough House that the incautious might find themselves slipping between the pages and transformed from reader to spook' Irish Times
Visa hela texten

Witty, thrilling and thought-provoking, it is Herron's best novel yet * Daily Express * Mick Herron's London Rules the fifth in his blackly comic Jackson Lamb spy series, got the year off to a cracking start as it filleted the pretensions of Britain's contemporary intelligence forces * Irish Times, Book of the Year * The permanently sozzled and flatulent Jackson Lamb, a former spook now reduced to managing disgraced spies at Slough House, is one of modern literature's greatest creations * Ben Walsh, Evening Standard * The curmudgeonly spymaster Jackson Lamb and his superannuated colleagues go from strength to strength, with Herron balancing suspenseful counterterrorism antics with black farce * The i, Best Books of 2018 * So funny that you might easily miss the bleak pain of many of the characters involved * Literary Review * By turns gripping and laugh-out-loud funny, with few concessions to the stifling modern cult of you-can't-say-that * Daily Mail, Books of the Year 2018 * The fifth instalment of the award-winning Jackson Lamb series is witty, sardonic and laugh-out-loud funny yet also thrilling and thought-provoking. Not many people can turn a terror attack into a farce but Herron achieves it with a cleverly constructed story, well-rounded characters and poetic prose. Herron has often been compared with spy thriller greats John le Carre and Len Deighton but it is time he was recognised in his own right as the best thriller writer in Britain today. In a series that never lets its fans down, London Rules is the best instalment yet * Sunday Express, ***** * If Slough House on Aldersgate Street EC1 really existed it would already rival the Old Curiosity Shop on Portsmouth Street WC2 as a landmark of literary London . . . Herron has read his Carl Hiaasen as well as his Charles Dickens. The coruscating cynicism and cartoon comedy do not detract from the seriousness of the message: 'Hate crime pollutes the soul, but only the souls of those who commit it' * Evening Standard * Jackson Lamb - subtle of brain but outrageously gross in almost every other way - still rules over his band of misfit agents in this fifth title in Herron's hilarious take on the contemporary spy thriller. Based at decrepit Slough House, dumping ground for the security services' awkward squad, his team get the jump on their disdainful colleagues when a weird terrorist plot starts to play out * Sunday Times Crime Club * London Rules epitomises precisely why Mick Herron's espionage novels are the new hallmarks of the genre. It's a rousing, provocative - and genuinely funny, at times - political thriller with a labyrinthine plot * Simon McDonald * the most remarkable and mesmerising series of novels, set mostly and explicitly in London, to have appeared in years. It is hypnotically fascinating, absolutely contemporary, cynical and hopeful * The Arts Desk * Herron adeptly negotiates the rules of satire and the laws of libel to create fictional public figures who simultaneously hit more than one real-life bullseye...Stylistically, Herron's narrative voice swoops from the high to the low but it's the dialogue that zings: the screenwriters of the inevitable TV version won't have to change much... Herron is a very funny writer, but also a serious plotter * Guardian * Excellent espionage tale that is also very funny without becoming Carry On Le Carre * The Sun * Sharper, funnier and more distorted than ever * Literary Review * London Rules may be the best Jackson Lamb thriller yet, and that's saying something, considering how brilliant the previous ones are * Mark Billingham * Jackson Lamb is one of the most singularly offensive, cruel and heartless - but above all funny - fictional creations of recent times . . . Similar in the tones of Len Deighton, devoid of all glamour, grimly realistic and brutal and darkly hilarious, London Rules further burnishes Mick Herron's reputation as the finest spy novelist of his generation * Irish Examiner * The great triumph of Mick

Mick Herron's six Slough House novels have been shortlisted for eight CWA Daggers, winning twice, and shortlisted for the Theakston Old Peculier Crime Novel of the Year three times. The first, Slow Horses, was picked as one of the best twenty spy novels of all time by the Daily Telegraph, while the most recent, Joe Country, was a Sunday Times top ten bestseller. Mick Herron was born in Newcastle upon Tyne, and now lives in Oxford.