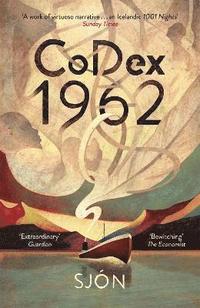 av Sjon
Häftad Engelska, 2019-05-02
149
Köp
Spara som favorit
Skickas inom 7-10 vardagar.
Fri frakt inom Sverige över 159 kr för privatpersoner.
Finns även som
Visa alla 1 format & utgåvor
'A masterpiece . . . I challenge any author to top it!' Sigridur Alberstsdottir, Icelandic National Broadcasting Service. Josef Loewe enters the world as a lump of clay - carried in a hatbox by his Jewish father Leo, a fugitive in WWII Germany. Taking refuge in a small-town guesthouse, Leo discovers a kindred spirit in the young woman who nurses him back to health and together they shape the clay into a baby. But en route to safety in Iceland, he is robbed of the ring needed to bring the child to life. It is not until 1962 that Josef can be 'born', only to grow up with a rare disease. Fifty-three years on, it leads him into the hands of a power-hungry Icelandic geneticist, just when science and politics are threatening to lead us all down a dark, dangerous road. At once playful and profoundly serious, this remarkable novel melds multiple genres into a unique whole: a mind-bending read and a biting, timely attack on nationalism.
Visa hela texten

Masterful . . . [it] feels like a noble descendant from Bulgakov's The Master and Margarita . . . Yet as with all such works, it's not the categorising, of course, but the work's own strikingly individual, grounded yet independent streak that is such a delight. . . . Sjon is known as one of Iceland's top writers. With CoDex 1962, his place in English is strengthened, especially with this rigorously empathetic translation by his longtime collaborator, Victoria Cribb. . . . This novel is a wonderwork - and an insistently sheer joy to read. -- Andrew Singer * World Literature Today * An extraordinary and original writer -- A.S. Byatt Sjon is one of our era's great writers. Like Ovid, Kafka, and Bulgakov, he is fascinated by metamorphosis and, from apparently limitless resources of the imagination, can convey what it must feel like -- Charles Baxter * Nation * Iceland's literary spell-binder ... A tantalising smoke of marvel and magic drifts through Sjon's work -- Boyd Tonkin * Economist 1843 * Dazzlingly funny and entertaining in sections, dramatic and tragic, light and serious, woven with the artistry we recognise in Sjon's other work ... he creates with his inexhaustible imagination a gorgeous and relevant ending -- Fridrika Benonysdottir * Frettabladid * Sjon's novels are brilliant collisions of history and fable, psychology and fantasy -- Chris Power * Guardian * This book is psychedelic, it's potent and it wants to consume the whole world . . . Sjon is a prodigal storyteller in all senses of the phrase . . . he is a master of atmosphere, a fine observer of the cross-hatchings of human motivation and a vivid noticer of detail. * New York Times Book Review * I found myself awed by its ambition, its uncommon narrative sophistication, its incredible emotional depth - especially in its concluding chapters - and, finally, most unexpectedly, its profound seriousness of purpose . . . it deserves all the attention and esteem it has received . . . every excess in CoDex 1962 is redeemed, accounted for, and justified by the end of the novel, which not only offers important revelations but also reconfigures everything that has preceded it so that the fantasy elements take on radical new meanings . . . far and away the best thing Sjon has ever written . . . It reads, on every page, like the work of a writer who is stretching his talents as far as they can go. It is one of the best novels of the year in any language - visceral, captivating, intellectually rewarding, and ultimately deeply moving - and its ambition and achievement are unlikely to be equalled by more than a handful of books this decade. -- Alex Dewar * Splice * Sure to delight the reader . . . irresistibly sweeps the reader away . . . a masterpiece, meticulously executed from the first page to the last -- Sigridur Albertsdottir * National Broadcasting Service Iceland * One blindingly beautiful section comprises a list of surrealist images, the nightly dreams of a group of townspeople . . . This book is a Norse Arabian Nights. Each section is a honeycomb. Stories are nested in stories and crack open to reveal rumour and anecdote, prose poems, tendrils of myth. This abundance isn't an empty show of virtuosity but rooted in Sjon's belief in the power and obligation of old-fashioned storytelling . . . [It] consumed me for the better part of a week. I can only echo Loewe, with gratitude, exasperation and awe. "This book's a bloody thief of time." -- Parul Sehgal * New York Times * Bewitching . . . His stories compound the dreamscapes of Surrealism, the marvels of Icelandic folklore and a pop-culture sensibility into free-form fables. Call it magic realism under Nordic lights . . . Sjon's finale anchors his ingenuity to a moving plea for solidarity Hrolfur, the entrepreneurial geneticist, yearns to "soar heavenwards into a world where imagination is the only law of nature that matters". CoDex 1962 applauds the aim, but distrusts his means and motive. The wild fl

Born in Reykjavik in 1962, Sjon is an Icelandic writer whose novels The Blue Fox, The Whispering Muse, From the Mouth of the Whale, Moonstone and CoDex 1962 have been translated into thirty-five languages. He has won several awards including the Nordic Council's Literature Prize for The Blue Fox and has also been shortlisted for the International IMPAC Dublin Literary Award and the Independent Foreign Fiction Prize, while Moonstone won the Icelandic Literary Prize and the Icelandic Booksellers' prize for Novel of the Year. Sjon has also published nine poetry collections, written four opera librettos as well as lyrics for various artists, and was nominated for an Oscar for his lyrics in the film Dancer in the Dark. In 2017, Sjon became the third writer - following Margaret Atwood and David Mitchell - to contribute to Future Library, a public artwork based in Norway spanning 100 years. He lives in Reykjavik, Iceland. Victoria Cribb has translated more than twenty-five books by Icelandic authors. Her translations of Moonstone and CoDex 1962 were both longlisted for the Best Translated Book Award and the PEN America Translation Prize. In 2017 she received the Ordstir honorary translation award for services to Icelandic literature.