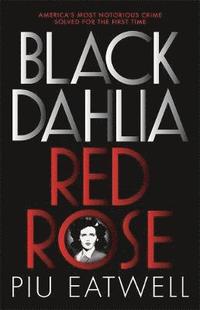 America's Most Notorious Crime Solved For the First Time

av Piu Eatwell
Häftad Engelska, 2017-09-26
189
Köp
Spara som favorit
Skickas inom 5-8 vardagar.
Fri frakt inom Sverige för privatpersoner.
On January 15th 1947 the naked, dismembered body of a black-haired beauty, Elizabeth Short, was discovered lying next to a pavement in a Hollywood suburb. She was quickly nicknamed The Black Dahlia. The homicide enquiry that followed consumed Los Angeles for years and the authorities blew millions of dollars of resources on an investigation which threw up dozens of suspects. But it never was solved, until now. Piu Eatwell for the first time reveals compelling evidence, both forensic and eye witness, which finally points to the identity of the murderer. This is a dark tale of sex, manipulation, orgies, obsession, psychopathy and one of the biggest police cover ups in history. The case was immortalised in James Ellroy's famous novel based on the case, in Kenneth Anger's Hollywood Babylon and Brian de Palma's movie.
Visa hela texten

A compelling read, in both style and substance, and one which packs a heavyweight punch in terms of the evidence uncovered and the resolution offered. This is a comprehensive account of the sad and ultimately tragic life of Elizabeth Short, and the web of intrigue that surrounds her death is untangled here in fascinating and painstaking detail. A must-read for anyone with an interest in the Black Dahlia - or indeed any fan of the true-crime genre. * Rod Reynolds *

Piu Eatwell was born in India, of mixed Anglo-Indian descent. She studied English at Oxford University. Piu subsequently worked as a lawyer and television producer for the BBC and other TV companies. She now lives in France and writes full-time on French-themed subjects, as well as historical non-fiction.Her other books are They Eat Horses, Don't They? The Truth About the French (Head of Zeus 2013 UK/St Martin's Press 2014 USA), The Dead Duke, his Secret Wife, and the Missing Corpse. (Head of Zeus 2014 UK/WW Norton-Liveright 2015 USA) and F is for France: A Curious Cabinet of French Wonders, was published by St Martin's Press/Pan Macmillan in June 2016.