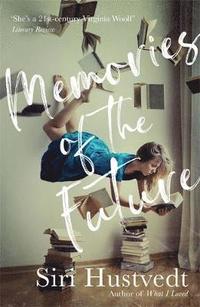 Memories of the Future

av Siri Hustvedt
Häftad Engelska, 2020-02-06
99
Köp
Spara som favorit
Skickas inom 3-6 vardagar.
Fri frakt inom Sverige för privatpersoner.
Finns även som
Visa alla 8 format & utgåvor
A provocative, wildly funny, intellectually rigorous and engrossing novel, punctuated by Siri Hustvedt's own illustrations - a tour de force by one of America's most acclaimed and beloved writers. Fresh from Minnesota and hungry for all New York has to offer, twenty-three-year-old S.H. embarks on a year that proves both exhilarating and frightening - from bruising encounters with men to the increasingly ominous monologues of the woman next door. Forty years on, those pivotal months come back to vibrant life when S.H. discovers the notebook in which she recorded her adventures alongside drafts of a novel. Measuring what she remembers against what she wrote, she regards her younger self with curiosity and often amusement. Anger too, for how much has really changed in a world where the female presidential candidate is called an abomination?
Visa hela texten

There is power here, fearsome and electric, bursting with rage at the patriarchy -- Philip Womack * Independent * The dialogue is . . . playful but punchy, insisting at once on the right of the female writer to claim a different authority from that of her male counterparts, and on her freedom to combine the male and female within her own head . . . the affectionate portrait of young people forging lives and personalities in solidarity with each other is movingly done . . .The diary sections are written with compelling energy, and bring the young woman easily to life, with her enticing combination of strength and weakness . . . it is this battle between the sexes that gives the book its bite . . . playful, thoughtful book about the workings of memory and the relationship between our older and younger selves. It is a paean to the pleasures of reading, celebrating the ways that a lifetime with books enhances and complicates selfhood. It's a work of autofiction that offers truthful fiction to counter an era of fake news. But it is most formidable as a novelistic take on the past fifty years of feminism, told through its parallel snapshots of 1978 and 2016. In this respect we can see it as a kind of successor to Doris Lessing's The Golden Notebook . . . the older S.H. has held fast. She knows, as she informs her male interlocutor, that the stories told here aren't over. They may never be over, and we are lucky to have novelists like Siri Hustvedt to help us to complicate and understand them. -- Laura Feigel * TLS * Like all the best postmodern novels, this metafictional investigation of time, memory, and the mutating self is as playful as it is serious. * Kirkus * Hustvedt is that rarest of beasts: a deeply intellectual writer whose work is joyful and not intimidating in the slightest. This is terrific -- Editor's Choice * Bookseller * Among the many riches of Siri Hustvedt's portrait of a young woman finding her way as an artist are her reflections on how acts of remembering, if they reach deep enough, can heal the broken present, as well as on the inherent uncanniness of feeling oneself brought into being by the writing hand. Her reflections are no less profound for being couched as philosophical comedy of a Shandean variety. * J. M. Coetzee * Various forms of detection, anchored to Hustvedt's deep knowledge of neuroscience and art, propel this rapier attack on sexism; this is a lusciously layered and suspenseful "portrait of the artist as a young woman," electric with wit, curiosity, and storytelling magic -- Donna Seaman * Booklist * Hustvedt deftly weaves and juxtaposes all these strands to explore the mechanics of story-making, the fallibility of memory, and the injustices of gender. She is absorbing, acute and frighteningly clever. -- Ella Walker * Herald, Glasgow * A clever, elegant novel * Good Housekeeping * Siri Hustvedt has never been afraid to go against the grain, and her seventh novel, Memories of the Future, confirms it. She has important things to say about sexual politics, capitalism and art . . . there is a great deal of transformative joy to be found in this story of a young woman arriving in New York to find her voice as a writer . . . Hustvedt brilliantly pinpoints how a woman might appear to willingly acquiesce to a man's demands to avoid a worse fate. She also skewers the guilt a woman might feel when she has escaped an assault. -- Alex Peake-Tompkinson * Evening Standard * Just as memory plays games with us, Hustvedt plays an exuberant game between it and fiction . . . There are lovely ironies and twists . . .it's under the control of a consummate intelligence. Hustvedt wears her erudition lightly and her cool intellect has a playful and warming passion. To experience her witty, speculative and incisive mind makes her book an unusual and great pleasure to read. -- Anne Haverty * Irish Times * [Hustvedt] tackles misogyny, memory and the artistic process with provocative brio. * The i * The reader h

Bloggat om Memories of the Future

Siri Hustvedt's first novel, The Blindfold, was published by Sceptre in 1993. Since then she has published The Enchantment of Lily Dahl, What I Loved, The Sorrows of an American, The Summer Without Men and The Blazing World, which was longlisted for the Man Booker Prize in 2014 and won the Los Angeles Times Book Prize for Fiction. She is also the author of the poetry collection Reading To You, and four collections of essays -Yonder, Mysteries of the Rectangle: Essays on Painting, A Plea for Eros and Living, Thinking, Looking, as well as the memoir The Shaking Woman or A History of My Nerves. Born in Minnesota, Siri Hustvedt now lives in Brooklyn, New York. She has a PhD in English from Columbia University and in 2012 was awarded the International Gabarron Prize for Thought and Humanities. She delivered the Schelling Lecture in Aesthetics in Munich in 2010, the Freud Lecture in Vienna in 2011 and the opening keynote at the conference to mark Kierkegaard's 200th anniversary in Copenhagen in 2013, while her latest honorary doctorate is from the University of Gutenburg in Germany. She is also Lecturer in Psychiatry at Weill Cornell Medical College and has written on art for the New York Times, the Daily Telegraph and several exhibition catalogues.