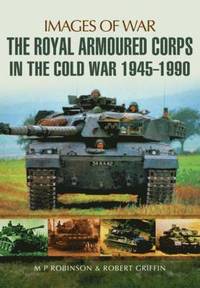 av M P Robinson, Robert Griffin
Häftad Engelska, 2016-06-01
199
Köp
Spara som favorit
The Royal Armoured Corps' composition may have changed dramatically during the four and a half decades of The Cold War but its role in the nation's defence has been predominant. This highly informative book focuses on the deployment of the British Army's armoured regiments from the end of the Second World War, their vehicles and equipment, the creation of the British Army of the Rhine, NATO commitments and other peripheral missions. The characteristics and variants of the Centurion, the powerful but short lived Conqueror, the Chieftain and Challenger are covered in expert text and by numerous images. The RAC in the Cold War is a tribute to the men who served in these famous regiment and their stories make fascinating reading.
Visa hela texten

"Armour modellers will find this book highly informative, both in terms of vehicle appearance and equipment stowage, but diorama builders are likely to gain the most inspiration."-- "Airfix Model World" (7/1/2017 12:00:00 AM)

Robert Griffin joined the British Army in 1967 as a 17 year old Junior Leader and served for many years as an AFV crewman in the 4/7th Royal Dragoon Guards in BAOR, BATUS, Cyprus, Northern Ireland, the UK and Bosnia. A recognised expert on post war British armour, he has written a number of books and articles on armoured vehicles of the Cold War period, including definitive works on the FV-214 Conqueror, Chieftain, Challenger 1 and FV432. M P Robinson studied history at Toronto's York University. He has written four books on postwar armour in English and French in 2014 and has edited 3 of Robert Griffin's previous works for Kagero Publishing. He is currently also preparing a study of the 1st Canadian Corps and the 21st Tank Brigade in the Battle of the Gothic Line.