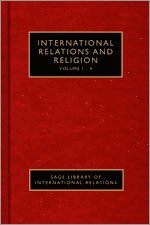 av Ron E Hassner
Inbunden Engelska, 2016-01-29
8299
Köp
Spara som favorit
Skickas inom 7-10 vardagar.
Fri frakt inom Sverige för privatpersoner.
The study of religion and international relations has been gathering pace over the past few decades, and has intensified since the start of the new millennium, when the discipline experienced a sudden surge of interest attributable to world events, starting with the Iranian Revolution and culminating with U.S. incursions into Afghanistan and Iraq.

This four-volume set organizes and contextualizes this burgeoning literature and its contribution to the study of international theory, focusing in particular on its influence in the subfield of war and peace studies.

The four volumes are arranged thematically, including papers which offer a range of answers to key questions such as: