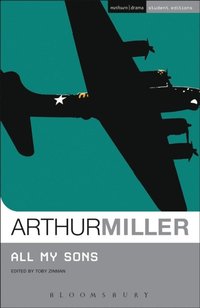 av Miller Arthur Miller, Zinman Toby Zinman
E-bok (PDF - DRM), Engelska, 2015-02-12
119
Ladda ned
Spara som favorit
Laddas ned direkt
Läs i vår app för iPhone, iPad och Android
Finns även som
Visa alla 8 format & utgåvor
This Student Edition of All My Sons is perfect for students of literature and drama and offers an unrivalled guide to Miller's play. It features an extensive introduction by Toby Zinman which includes: a chronology of Miller's life and times; a summary of the plot and commentary on the characters, themes, language, context and production history of the play. Together with over twenty questions for further study and detailed notes on words and phrases from the text, this is the definitive edition of the play. As Miller's first successful play on Broadway, All My Sons launched his career and established Miller as America's social critic. A devastating indictment of war-profiteering, the play exposes the awful price paid by self-interest and greed fostered by capitalism. Set in 1947 in the Keller family's home in the mid-west, a shattered apple tree stands as a reminder of the pilot-son, lost during the war. Joe Keller has evaded justice for his part in the deaths of pilots caused by faulty engine parts manufactured in his factory, but the family is unable to put the past behind them.
Visa hela texten

'The uniform structure and consistent approach eveident in these [first] four volumes make them readable and accessible to students and scholars alike and guarantee that these editions will certainly persist as invaluable tools for those who both enjoy Miller as a dramatist and study him as a significant social and American spokesperson.' The Arthur Miller Journal, fall 2010 Arthur Miller's first successful play is a devastating indictment of the post-war American dream. Neil Norman, Daily Express, 28.5.10 Miller's theme of man's responsibility towards his fellow men feels genuinely noble rather than merely didactic. It is also urgently topical. Charles Spencer, Daily Telegraph, 28.5.10 All My Sons, according to David Mamet, is not only Arthur Miller's greatest play but also one of the ten best American plays of the 20Th century. Dominic Maxwell, The Times, 29.5.10 This saturated realism may seem to be the default mode for All My Sons, which had its origins in a real-life incident. Still, there's another strand to the play: a visionary, apocalypric element... Susannah Clapp, Observer, 30.5.10 Miler ultimately puts us all on trial. This is a production of rare power and intensity... Tim Walker, Sunday Telegraph, 30.5.10 Arthur Miller's first major stage success set a template for his searing dessections of the American Dream. Sibhan Murphy, Metro (London), 1.6.10 Arthur Miller's 1947 play is an extraordinary construction, rising inexorably to peak of guilt revelation even as it descends into the dephts of a man's and a nation's psyche. Nina Caplan, Time Out London, 3.6.10 A preventable tragedy is at the nub of Arthur Miller's 1947 play All My Sonsl It was red-hot with resonance then and, some six decades on, with accusations flying above substandard or inadequate equipment provided for Armed Forces in Afghanistan, it is even more combustible now. Georgina Brown, Mail on Sunday, 6.6.10

Arthur Miller (1915-2005) was arguably the most important playwright of the twentieth century whose oeuvre includes novels, screenplays, essays and an autobiography. Six volumes of his plays and a volume of his theatre essays are published by Methuen Drama. Toby Zinman is Professor of English, University of the Arts, Philadelphia USA, and a theatre critic for the Philadelphia Inquirer and Variety.