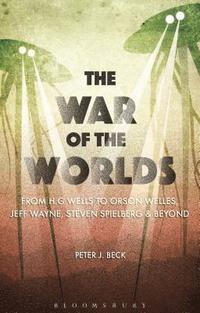 The War of the Worlds

From H. G. Wells to Orson Welles, Jeff Wayne, Steven Spielberg and Beyond

av Professor Peter J Beck
Inbunden Engelska, 2016-08-25
1169
Köp
Spara som favorit
Skickas inom 10-15 vardagar.
Gratis frakt inom Sverige över 159 kr för privatpersoner.
Finns även som
Visa alla 3 format & utgåvor
First published in 1897, H.G. Wells's alien invasion narrative The War of the Worlds was a landmark work of science fiction and one that continues to be adapted and referenced in the 21st century. Chronicling the novel's contexts, its origins and its many multi-media adaptations, this book is a complete biography of the life - and the afterlives - of The War of the Worlds. Exploring the original text's compelling sense of place and vivid recreation of Wells's Woking home and the concerns of fin-de-siecle Britain, the book goes on to chart the novel's immediate international impact. Starting with the initial serialisations in US newspapers, Peter Beck goes on to examine Orson Welles's legendary 1938 radio adaptation, TV and film adaptations from George Pal to Steven Spielberg, Jeff Wayne's rock opera and the numerous other works that have taken their inspiration from Wells's original. Drawing on new archival research, this is a comprehensive account of the continuing impact of The War of the Worlds.
Visa hela texten

This history of a classic novel, traced from the first inspiration through to twenty-first-century adaptations, is also an engaging portrait of the young Wells in the crucial year he spent at Woking: the year he drafted the book, established his literary career, founded modern science fiction - and, given the impact of Wells's work, the year that changed history. Accessible, authoritative and engaging: this is an unmissable traveller's guide to the World of H.G. Wells's War. * Stephen Baxter, President of the British Science Fiction Association, and a Vice-President of the HG Wells Society * If you want to discover how HG Wells created The War of the Worlds, how others have refashioned it for different times and media, and how a 'scientific romance' reshaped our collective imaginations, Peter Beck's treasure trove of a book has the answers - a clear, reliable, fascinating study. * Dr Michael Sherborne, author of HG Wells: Another Kind of Life * H. G. Wells is one of the great modern myth-makers, and The War of the Worlds is his most terrifying vision of future warfare. Peter Beck's richly rewarding study traces Wells's story from its origins in the 1890s to its current status as cinema classic and multi-media icon. This book is both a mine of information and a pleasure to read. * Patrick Parrinder, Emeritus Professor, University of Reading * No one would have believed in the early years of the twenty-first century that an intelligence as vast and cool and sympathetic as Peter Beck's was watching H. G. Wells's The War of the Worlds as keenly and closely as he must have been, on the evidence of this marvellous book. Beck's work is more than just a book about a book: it's about the ways in which a story becomes a modern myth and about how H. G. Wells made himself into a writer. Scrupulously and widely researched, this is a wonderful 150th birthday present for the founding father of British science fiction. * Simon James, Professor of English Literature, Durham University, Editor, The Wellsian; author of Maps of Utopia: H.G. Wells, Modernity and the End of Culture * This book takes a 'broadbrow' approach to its subject in the open-minded spirit of the word coined by Wells himself. Beck has written an immensely readable account of the impact and multi-media afterlives of Wells's narrative of alien invasion: from radio, to film, to rock show and beyond. It will appeal equally to scholars and to fans, as the most comprehensive mapping yet of The War of the Worlds' ever-mutating cultural DNA. * Keith Williams, author of H.G. Wells, Modernity and the Movies * This substantial study ... should certainly now be the first port of call for anyone wanting to understand the context of the novel's creation. Beck's is very much an historian's analysis, the product of exhaustive and fruitful research into many abstruse archival sources far beyond the scope of the standard literary study ... Professor Beck should be highly commended for this major, readable, and always interesting addition to Wellsian scholarship. * Science Fiction Studies *

Peter J. Beck is Emeritus Professor of International History at the University of Kingston, UK. His previous publications include Presenting History: Past and Present (2012).