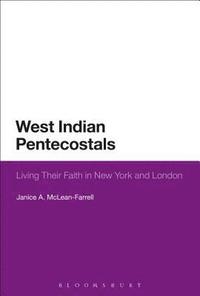 Living Their Faith in New York and London

av Dr Janice A McLean-Farrell
Inbunden Engelska, 2016-02-11
1119
Köp
Spara som favorit
Kan levereras innan julafton!
Finns även som
Visa alla 3 format & utgåvor
This is a significant in-depth study that explores the cultural context of the religious experience of West Indian immigrant communities. Whereas most studies to date have focussed on how immigrants settle in their new home contexts, Janice A. McLean-Farrell argues for a more comprehensive perspective that takes into account the importance of religion and the role of both 'home' and the 'host' contexts in shaping immigrant lives in the Diaspora. West Indian Pentecostals: Living Their Faith in New York and London explores how these three elements (religion, the 'home' and 'host' contexts) influence the ethnic-religious identification processes of generations of West Indian immigrants. Using case studies from the cities of New York and London, the book offers a critical cross-national comparison into the complex and indirect ways the historical, socio-economic, and political realities in diaspora contribute to both the identification processes and the 'missional' practices of immigrants. Its focus on Pentecostalism also provides a unique opportunity to test existing theories and concepts on the interface of religion and immigration and makes important contributions to the study of Pentecostalism.
Visa hela texten

McLean-Farrell's gift to readers is a fascinating glimpse into the intergenerational and cross-national religious and ethnic identities of a 'new' black diaspora population. Her work is a timely and valuable contribution to the growing literature on the religious lives of migrants and their descendants, and will be a resource to readers of global Pentecostalism, black spirituality, migration and mission, and the religious lives of the new second generation. * Sociology of Religion * The book provides a detailed interpretation of Pentecostalism from the perspectives of the West Indian peoples. The work written by a well knowledgeable scholar and informed by many years of field work is a major addition to research on Pentecostalism as a local and global phenomenon. This work will be of interest to many scholars who are engaged in comparative studies of diaspora traditions, particularly as they relate to new forms of Christianity in contemporary society. A must read for scholars of religion and anthropology. * Jacob K. Olupona, Professor of African and African American Studies, Harvard University and Professor of African Religion, Harvard Divinity School, USA * Studies in Immigrant Christianity have become an important part of reflections on the development of the faith as a non-Western religion. In this volume Janice Maclean-Farrell provides an insider perspective on an issue that has contributed immensely to the nature of Christianity as a world religion. Most of the studies on immigrant Christianity have focused on Africa but here in this volume we have one of the handful that reflects on those experiences from a West Indies perspective. The thoughts and experiences that Janice brings together here are therefore genuinely "emic" and she does so graciously without undermining the academic intensity required from a book of this nature. * J. Kwabena Asamoah-Gyadu, Baeta-Grau Professor of African Christianity and Pentecostalism, Trinity Theological Seminary, Ghana * The book provides a new and interesting explanation of one of the most important developments on the socio-cultural landscape of Britain in the past seven or eight decades. It makes a well-argued contribution to the growing literature on immigrant-led trans-national Pentecostal practices in major cities. Its specific focus on West Indian Pentecostals in London and New York and its heavy reliance on detailed empirical data make it an important and unique contribution. * Abel Ugba, Senior Lecturer of Journalism, University of East London, UK *

Janice A. McLean-Farrell is a faculty member and coordinator of the Global New York Church Project at City Seminary of New York, USA. She is co-editor of Understanding World Christianity (2011) and Engaging the World (2014).