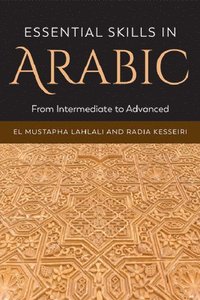 From Intermediate to Advanced

av El Mustapha Lahlali, Radia Kesseiri
Inbunden Engelska, 2018-02-28
1369
Köp
Spara som favorit
Finns även som
Visa alla 3 format & utgåvor
How to improve your reading, listening and communication skills in ArabicDo you want to build on your Arabic reading, writing and listening skills? Improve your ability to communicate in this language? This is the book for you. Offering practical sessions and exercises, each module contains a wide range of authentic, contemporary texts so that you can practice your skills as they develop. Moving you from the intermediate to the advanced level of Arabic you will work through sessions on culture and society, the environment, education in the Arab world, global issues, media and communication, the economy, sports, and arts and literature. Each module follows the same structure, covering the essential skills of reading, grammar, vocabulary, listening, translation, writing and speaking.The book includes:A wide variety of drills to help you refine your reading, writing, speaking and listening skillsA key to exercises so you can check your progressA glossary of key Arabic termsAccess to online audio material to accompany the listening drills
Visa hela texten

"Essential Skills in Arabic by Mustapha Lahlali and Radia Kesseiri is, without a doubt, one of the most valuable resources for learners who not only want to learn the basic skills of Arabic, but also want to attain a degree of competency in Arabic by acquiring the ability to deal with the complex syntactic features of the language."-- Nesreen Alhmadi, Tibah University, British Journal of Middle Eastern Studies