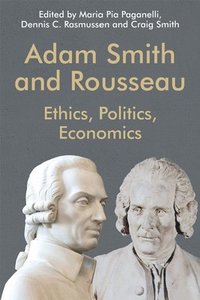 av Maria Pia Paganelli, Dennis C Rasmussen, Craig Smith
Häftad Engelska, 2019-08-31
334
Köp
Spara som favorit
Finns även som
Visa alla 2 format & utgåvor
Looks at all aspects of the pivotal intellectual relationship between two key figures of the Enlightenment Jean-Jacques Rousseau (1712-78) and Adam Smith (1723-90) are two of the foremost thinkers of the European Enlightenment. They who made seminal contributions to moral and political philosophy and shaped some of the key concepts of modern political economy. Though we have no solid evidence that they met in person, we do know that they shared many friends and interlocutors. In particular, David Hume was Smith's closest intellectual associate and was also the one who arranged for Rousseau's stay in England in 1766. This collection brings together an international and interdisciplinary group of Adam Smith and Rousseau scholars to explore the key shared concerns of these two great thinkers in politics, philosophy, economics, history and literature
Visa hela texten

This volume is nicely done ... Smith and Rousseau studies are both in robust health right now, but with only a few scholars who are capable of writing well about both philosophers. This volume will assist with the on-going work of cross-fertilisation, and make it much easier in future for more to follow suit.--Christopher Brooke, University of Cambridge "Journal of Scottish Philosophy "

Maria Pia Paganelli is Associate Professor in the Department of Economics at Trinity University, San Antonio, Texas. She is the co-editor of The Oxford Handbook on Adam Smith (OUP, 2013) along with Christopher Berry and Craig Smith. She has written extensively in journals on David Hume and Adam Smith. Dennis C. Rasmussen is Associate Professor in the Department of Political Science at Tufts University. He is the author of The Pragmatic Enlightenment: Recovering the Liberalism of Hume, Smith, Montesquieu and Voltaire (Cambridge University Press, 2014), The Problems and Promise of Commercial Society: Adam Smith's Response to Rousseau (Penn State University Press, 2008). Craig Smith is Adam Smith Lecturer in the Scottish Enlightenment in the School of Social and Political Sciences at The University of Glasgow.