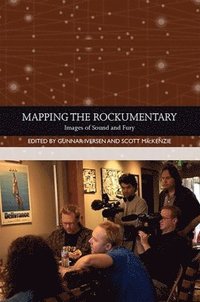 Images of Sound and Fury

av Gunnar Iversen, Scott MacKenzie
Inbunden Engelska, 2021-05-31
779
Bevaka
Spara som favorit
Ännu ej utkommen – klicka "Bevaka" för att få ett mejl så fort boken boken går att köpa.
Mapping the Rockumentary: Images of Sound and Fury is the first anthology to explore the rockumentary as a central component of both the documentary and world cinema. The book includes case studies of bands and performers such as The Beatles, The Rolling Stones, Bob Dylan, The Clash, Madonna and Metallica and performers from Asia, Europe and the Americas, making the case for rockumentaries as part of an established and ever-evolving cinematic tradition. With an international and transdisciplinary approach, and addressing rocumentaries in film, television and on the internet, the book explores the form's rich history from the 1950s to the present day - and beyond.
Visa hela texten

Professor Gunnar Iversen is Professor of Film Studies in the School of Art and Culture at Carleton University. Scott MacKenzie is Professor of Film and Media, Queen's University. His books include: Cinema and Nation (2000); Purity and Provocation: Dogma 95 (2003); Screening Quebec (2004); The Perils of Pedagogy: The Works of John Greyson (2013); Film Manifestos and Global Cinema Cultures (2014); Films on Ice: Cinemas of the Arctic (2015); Arctic Environmental Modernities (2017); Arctic Cinemas and the Documentary Ethos (2019); and Process Cinema: Handmade Film in the Digital Age (2019).