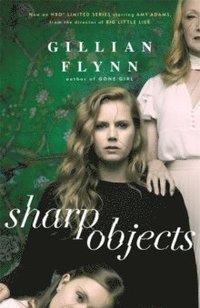 av Gillian Flynn
Häftad Engelska, 2018-06-21
99
Köp
Spara som favorit
Finns även som
Visa alla 1 format & utgåvor
From the author of the No.1 bestseller and international phenomenon GONE GIRL. Now a major HBO/SKY ATLANTIC TV series starring Amy Adams, with the director of BIG LITTLE LIES, Jean-Marc Vallee. When two girls are abducted and killed in Missouri, journalist Camille Preaker is sent back to her home town to report on the crimes. Long-haunted by a childhood tragedy and estranged from her mother for years, Camille suddenly finds herself installed once again in her family's mansion, reacquainting herself with her distant mother and the half-sister she barely knows - a precocious 13-year-old who holds a disquieting grip on the town. As Camille works to uncover the truth about these violent crimes, she finds herself identifying with the young victims - a bit too strongly. Clues keep leading to dead ends, forcing Camille to unravel the psychological puzzle of her own past to get at the story. Dogged by her own demons, Camille will have to confront what happened to her years before if she wants to survive this homecoming. 'To say this is a terrific debut novel is really too mild. I haven't read such a relentlessly creepy family saga since John Farris's ALL HEADS TURN AS THE HUNT GOES BY, and that was thirty years ago, give or take. SHARP OBJECTS isn't one of those scare-and-retreat books; its effect is cumulative. I found myself dreading the last thirty pages or so, but was helpless to stop turning them. Then, after the lights were out, the story just stayed there in my head, coiled and hissing, like a snake in a cave' STEPHEN KING 'SHARP OBJECTS is a witty, stylish, and compelling debut. A real winner' HARLAN COBEN 'Sharp, clean exciting writing that grabs you from the first page. A real pleasure' KATE ATKINSON 'Sharp Objects is one of the freshest debut thrillers to come around in a long while. It's a gripping, substantive story, stripped of cliche, and crafted with great style. The characters are refreshingly real, burdened with psychological issues that enrich the story' AUGUSTEN BURROUGHS 'With her blistering debut Sharp Objects, Gillian Flynn hit the ground running.' VAL McDERMID 'Sharp Objects is creepy, claustrophobic and dark as all hell. With a gloriously twisted plot, a brooding atmosphere and a beautifully realised central character, this is easily the best debut novel I've read in a very long time.' MARK BILLINGHAM
Visa hela texten

To say this is a terrific debut novel is really too mild ... [it is] a relentlessly creepy family saga. I found myself dreading the last thirty pages or so, but was helpless to stop turning them. Then, after the lights were out, the story just stayed there in my head, coiled and hissing, like a snake in a cave * Stephen King * This is a stylish thriller about housewives who don't recognise their own desperations, while the reader recognises with fascinated clarity the nastiness and vacuity of life in an updated Stepford * Literary Review * It is a stunningly accomplished evocation of the oppressiveness of small-town life and is just as assured in depicting the gradually revealed psychological disorder that links Camille to both the killer and victims * Sunday Times * Compulsively disturbing and ... exciting * Time Out * [A] striking first novel ... a relentlessly dark tale, with some very disturbing characters, Camille among then, and it makes a powerful impact * Sunday Telegraph * A stylish and compelling debut. A real winner * Harlan Coben * If you love Martha O'Connor look out for Gillian Flynn's debut, Sharp Objects ... a gothic fairytale-gone-bad * Company * The horror creeps up slowly, with Flynn misdirecting the reader until the shocking, dreadful and memorable double ending * Publisher's Weekly * Six years before she became famous for Gone Girl, Gillian Flynn's first book wowed the critics.. it's a dark, unsettling read that fills you with doubt and keeps you second-guessing the whole way through" * ESSENTIALS *