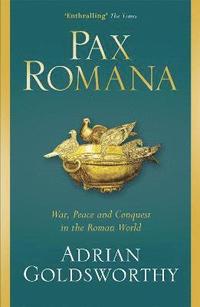 War, Peace and Conquest in the Roman World

av Adrian Goldsworthy
Häftad Engelska, 2017-08-24
139
Köp
Spara som favorit
Finns även som
Visa alla 1 format & utgåvor
The Pax Romana is famous for having provided a remarkable period of peace and stability, rarely seen before or since. Yet the Romans were first and foremost conquerors, imperialists who took by force a vast empire stretching from the Euphrates in the east to the Atlantic coast in the west. Their peace meant Roman victory and was brought about by strength and dominance rather than co-existence with neighbours. The Romans were aggressive and ruthless, and during the creation of their empire millions died or were enslaved. But the Pax Romana was real, not merely the boast of emperors, and some of the regions in the Empire have never again lived for so many generations free from major wars. So what exactly was the Pax Romana and what did it mean for the people who found themselves brought under Roman rule? Acclaimed historian Adrian Goldsworthy tells the story of the creation of the Empire, revealing how and why the Romans came to control so much of the world and asking whether the favourable image of the Roman peace is a true one. He chronicles the many rebellions by the conquered, and describes why these broke out and why most failed. At the same time, he explains that hostility was only one reaction to the arrival of Rome, and from the start there was alliance, collaboration and even enthusiasm for joining the invaders, all of which increased as resistance movements faded away. A ground-breaking and comprehensive history of the Roman Peace, Pax Romana takes the reader on a journey from the bloody conquests of an aggressive Republic through the age of Caesar and Augustus to the golden age of peace and prosperity under diligent emperors like Marcus Aurelius, offering a balanced and nuanced reappraisal of life in the Roman Empire.
Visa hela texten

'Goldsworthy brings a wonderful vitality to his subject; his account possesses an immediacy usually associated with contemporary history. The reader is treated to an enthralling view of a highly complex system of governance. Too often, Rome's brutality has overshadowed the brilliance of her administrators. Goldsworthy gives statecraft its proper emphasis' -- Gerard DeGroot * THE TIMES * 'In this thick but entirely compelling account, acclaimed British historian Adrian Goldsworthy, who has written extensively about the Roman Empire, explains how it enforced genuine and long-lasting, if not idyllic peace . . . An engrossing account of how the Roman Empire grew and operated' * KIRKUS REVIEWS * The latest in the line of tomes about the toga wearers on the Tiber is Goldsworthy's admirably thorough account of how they conquered then controlled their empire -- John Lewis-Stempel * EXPRESS * 'The best of his many excellent books on ancient Rome for its range and depth' -- Peter Jones * BBC HISTORY * 'The reign of Augustus - when the Romans learned to stop worrying and love the emperors - is the center of Adrian Goldworthy's powerful reassessment of Roman imperialism' -- Greg Woolf * WALL STREET JOURNAL * Goldsworthy persuasively describes daily life for ordinary people, both Roman citizens and the indigenous populations who lived under Roman rule as subjects or slaves -- Greg Jameson * ENTERTAINMENT FOCUS.COM * 'For Goldsworthy, the author of a series of excellent books on the Roman world, the idea of empire gets an unfairly bad press. In this refreshing and thoughtful book, he argues that military power alone fails to explain why the Romans managed to rule such a huge domain for so long' -- Dominic Sandbrook * SUNDAY TIMES Christmas Books * Adrian Goldsworthy is on top form with Pax Romana. Pointing out that war was virtually endemic in the ancient world, he explains clearly and persuasively how Rome was able to maintain the peace for such a long period -- Peter Jones * BBC HISTORY * Goldsworthy's lively and thought-provoking history gives a vivid impression of Roman peace from the point of view of both the conquerors and those conquered * DAILY MAIL * It is a satisfying and thought-provoking book for anyone determined to dislike the Romans while admiring their imperial achievement -- Christopher Kelly * TIMES LITERARY SUPPLEMENT * Adrian Goldsworthy has made a reputation for himself as a scholar who writes in an accessible way on Roman history. In Pax Romana he argues that Roman power did not exclusively rely upon military force and brutality but on a series of complex arrangements with conquered peoples * IAIN DALE.COM * Two lessons for today stand out in the book: First, it is hard to make and keep a peace. Second, the greatest threat to the Pax Romana came not from foreigners but from the internal power struggles of the Romans themselves. -- Thomas E Ricks * NEW YORK TIMES *

Adrian Goldsworthy has a doctorate from Oxford University. His first book, THE ROMAN ARMY AT WAR was recognised by John Keegan as an exceptionally impressive work, original in treatment and impressive in style. He has gone on to write several other books, including THE FALL OF THE WEST, CAESAR, IN THE NAME OF ROME, CANNAE and ROMAN WARFARE, which have sold more than a quarter of a million copies and been translated into more than a dozen languages. A full-time author, he regularly contributes to TV documentaries on Roman themes. Visit www.adriangoldsworthy.com for more information.