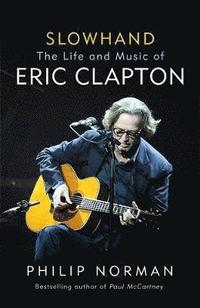 The Life and Music of Eric Clapton

av Philip Norman
Inbunden Engelska, 2018-11-06
269
Köp
Spara som favorit
Skickas inom 7-10 vardagar.
Fri frakt inom Sverige för privatpersoner.
Finns även som
Visa alla 3 format & utgåvor
'The masterful biographer Philip Norman has unearthed countless fascinating details' DAILY MAIL Eric Clapton is acknowledged to be rock's greatest virtuoso, the unrivalled master of its most essential tool, the solid-body electric guitar. Clapton transfigured three of the 1960s' most iconic bands, the Yardbirds, Cream and Blind Faith, walking away from each when it failed to measure up to his exacting standards. He was the only outsider be an honorary member of the Beatles and the Rolling Stones, and the studio musician of choice for solo superstars from Bob Dylan to Aretha Franklin. Yet even as a rock god in excelsis, his true passion was always the blues. Even his own blues heroes, the likes of Muddy Waters, B. B. King and Buddy Guy, would recognise the supremacy of this wispy white boy from the English county of Surrey. No life has been more rock 'n' roll than Clapton's in his epic consumption of drugs and alcohol, his insatiable appetite for expensive cars, clothes, and women - most famously revealed when he fell in love with Pattie Boyd, the wife of his best friend, George Harrison, and the inspiration for 'Layla'. With the benefit of unrestricted access to family members, close friends and fellow musicians, and his encyclopedic knowledge of sixties music and culture, Philip Norman has written the definitive portrait of the insecure, often pain-racked man.
Visa hela texten

Extraordinary stories ... the entire tale, including how, miraculously, late in life Clapton learned to function as a normal, civilised person, enjoying a long and apparently faithful second marriage, is told with wonderful vividness -- Trevor Hodgett * ROCK N REEL * Many unexpected details have been unearthed by an author painting a vivid picture of a man whose extraordinary career has been carved out of his ability "to conjure magic from a slab of electrified wood" -- Russell Newmark * THE BEAT * Lucid -- Peter Aspden * FINANCIAL TIMES * Solid and sad -- Helen Brown * DAILY TELEGRAPH </i>Music Books of the Year<i> * On a mission to expose the music of the US south to a new audience in as pure a form as possible, [Clapton] captured the raw emotion of the sound he loved enough to transfix his young listeners. A generation was discovering an alien language with which they instinctively felt at home. That cultural leap - which began with conversations in record shops, coffee bars and art schools, and eventually swept the world - is one of the key stories of the last century and is always worth re-examining, as Philip Norman does in this biography of one of the movement's pioneers -- Richard Williams * THE GUARDIAN * As usual, the masterful biographer Philip Norman has unearthed countless fascinating details -- Mark Mason * DAILY MAIL * It has taken a biographer as perceptive and clear-sighted as Philip Norman to do Clapton justice ... Despite everything, you end up liking Clapton, and feeling as if you know and understand him. It is proof that Norman's biography has done its work -- Will Hodgkinson * THE TIMES * Slowhand reads like a textbook account of all the pathologies of the rock-star life: promiscuity, infidelity, heroin addiction, alcoholism -- Victoria Segal * SUNDAY TIMES *

Philip Norman was born in London and brought up on the Isle of Wight. He joined the Sunday Times at twenty-two, soon gaining a reputation as Atticus columnist and for his profiles of figures as diverse as Elizabeth Taylor, Little Richard and Colonel Gaddafi. Author of the UK and US bestseller Shout!, he has also written the definitive lives of Paul McCartney, Buddy Holly, Mick Jagger, Elton John and John Lennon.