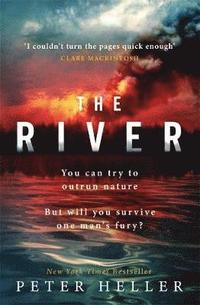 av Peter Heller
Inbunden Engelska, 2019-05-14
209
Köp
Spara som favorit
Skickas inom 7-10 vardagar.
Fri frakt inom Sverige för privatpersoner.
ONE OF THE OBSERVER THRILLERS OF THE YEAR: 'GLORIOUS PROSE AND RAZOR-SHARP TENSION' 'LYRICAL AND ACTION-PACKED' Guardian 'I COULDN'T TURN THE PAGES FAST ENOUGH' Clare Mackintosh 'IMPOSSIBLE TO PUT DOWN, OR FORGET' Sunday Mirror 'GLORIOUS DRAMA AND LYRICAL FLAIR Denise Mina, New York Times Two friends Wynn and Jack have been best friends since their first day of college, brought together by their shared love the great outdoors. The adventure of a lifetime When they decide to canoe down the Maskwa River in northern Canada, they anticipate the ultimate wilderness experience: no phones, no fellow travellers, no way of going back. A wild ride But as a wildfire starts to make its way towards them, their trip becomes a desperate race for survival. And when a man suddenly appears, claiming his wife has vanished, the fight against the raging flames becomes a much deadlier game of cat and mouse.
Visa hela texten

This story of a battle for survival will drag you off your sofa and plunge you down foaming white water rapids in a fragile canoe. It's a high adventure - the kind you seldom come across anymore - laced with a thriller twist for an extra kick ... The author's a whitewater kayaker and his descriptions of wild sailing and observations of the wilderness are lyrically poetic. Loved it! -- Alex Gordon * Evening Telegraph * From start to finish, Heller carries the reader aloft on graceful prose, intense action, and deeply felt emotion. * Publishers Weekly (starred review) on THE DOG STARS * Surprising and irresistible. * Booklist (starred review) on THE DOG STARS * Stunning. * Library Journal (starred review) on THE DOG STARS * Ravishing. . . The supreme pleasure of this book is the lovely writing. . . The pages of The Dog Stars are damp with grief for what is lost and can never be recovered. But there are moments of unexpected happiness, of real human interaction, infused with love and hope, like the twinkling of a star we might wish upon, which makes this end-of-the-world novel more like a rapturous beginning. . . . Remarkable. * San Francisco Chronicle on THE DOG STARS * The Dog Stars by Peter Heller is a heavenly book, a stellar achievement by a debut novelist that manages to combine sparkling prose with truly memorable, shining, characters. It contains all of the lyricism of Cormac McCarthy at his best. * New York Journal of Books on THE DOG STARS * In The Dog Stars, Peter Heller serves up an insightful account of physical, mental, and spiritual survival unfolded in dramatic and often lyrical. * Boston Globe on THE DOG STARS * [The Dog Stars] gripped me-it's the real deal. One of those books that makes you happy for literature. * Junot Diaz, Wall Street Journal on THE DOG STARS * Magical and life-affirming. * Guardian on THE DOG STARS * A dreamy, post-apocalyptic love letter to things of beauty, big and small. * Gillian Flynn on THE DOG STARS * Suspenseful and gut-wrenching. * Chicago Daily Herald * Heller once again chronicles life-or-death adventure with empathy for the natural world and the characters who people it. He writes most mightily of the boys' friendship and their beloved, uncompromising wilderness, depicting those layers of life that lie far beyond what is more commonly seen. * Booklist * Suspenseful... With its evocative descriptions of nature's splendour and brutality, Heller's novel beautifully depicts the powers that can drive humans apart - and those that compel them to return repeatedly to one another * Publishers Weekly * Using an artist's eye to describe Jack and Wynn's wilderness world, Los Angeles Times Book Prize finalist Heller has transformed his own outdoor experiences into a heart-pounding adventure that's hard to put down. * Library Journal (Starred Review) * Two college friends' leisurely river trek becomes an ordeal of fire and human malice... Heller confidently manages a host of tensions... and his pacing is masterful as well, briskly but calmly capturing the scenery in slower moments, then running full-throttle and shifting to barrelling prose when danger is imminent... Fresh and affecting... An exhilarating tale delivered with the pace of a thriller and the wisdom of a grizzled nature guide * Kirkus (Starred Review) * Masterly paced and artfully told, The River is a page-turner that demands the reader slow down and relish the sheer poetry of the language... Through stories of man versus nature date back to the Odyssey, The River thrills as Heller invites his characters to confront their own mortality without losing sight of the deep connections between humans and their environment. * BookPage (starred review) * "Unless we are very lucky, someone is going to die," one of the adventurers in Peter Heller's new novel says. Like his last book, The Dog Stars, The River is a beauty-of-nature/cruelty-of-humanity hybrid, but this time he leans into the thriller aspect of the tale, with grippin

PETER HELLER is the award-winning author of THE DOG STARS, a New York Times bestseller and a Guardian, San Francisco Chronicle and Atlantic Book of the Year. Born and raised in New York, he has travelled the world as an expedition kayaker, writing about challenging descents in the Pamirs, the Tien Shan mountains, the Caucuses, Central America and Peru. He is a graduate of the Iowa Writers' Workshop, where he received an MFA in fiction and poetry, and won a Michener fellowship for his epic poem 'The Psalms of Malvine'.