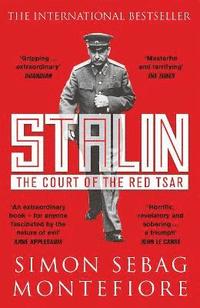 The Court of the Red Tsar

av Simon Sebag Montefiore
Häftad Engelska, 2021-09-02
149
Köp
Spara som favorit
Finns även som
Visa alla 2 format & utgåvor
Winner of the British Book Awards History Book of the Year Longlisted for the Samuel Johnson Prize This thrilling biography of Stalin and his entourage during the terrifying decades of his supreme power transforms our understanding of Stalin as Soviet dictator, Marxist leader and Russian tsar. Based on groundbreaking research, Simon Sebag Montefiore reveals in captivating detail the fear and betrayal, privilege and debauchery, family life and murderous cruelty of this secret world. Written with extraordinary narrative verve, this magnificent feat of scholarly research has become a classic of modern history writing. Showing how Stalin's triumphs and crimes were the product of his fanatical Marxism and his gifted but flawed character, this is an intimate portrait of a man as complicated and human as he was brutal and chilling.
Visa hela texten

One of the two outstanding books of the year ... the most civilised and elegant chronicle of brutality and ruthlessness I have ever read, its prose cool and clear but never indifferent * DAILY TELEGRAPH * Horrific, revelatory and sobering ... triumph of research and should be required reading in Russia. Book of the Year -- John Le Carre * OBSERVER * This grim masterpiece, shot through with lashes of black humour ... The personal details are riveting -- Antonia Fraser * MAIL ON SUNDAY * Fascinating ... [Montefiore] concentrates, as any good historian should, on pushing forward the boundaries of our knowledge of the subject ... [He] provides rich detail of daily life and family relationships in a world of human values turned inside out ... scrupulously fair in the way he describes Stalin's qualities - including his ability to charm, his uncanny grasp of geopolitical issues, his brilliant handling of foreign statesmen and his genuine passion for literature -- Antony Beevor * SUNDAY TIMES * Masterful and terrifying account of Stalin ... seldom has the picture been put in finer focus than by Sebag Montefiore. It is partly through his diligent interviews with the children of survivors and his admirable combination of history and gossip that one sees the awful banality, the brutal crudity of the men who carelessly sent so many millions to their senseless deaths * THE TIMES * This magnificent portrait ... Montefiore has mined the rich veins of recent Russian writing on the Stalin age and of newly opened archives to give us an intimate history ... The stifling, contiguous life of the Soviet elite in and around the Kremlin is wonderfully conveyed, in some of the most striking and literary passages in the book ... A wonderfully rich and vibrant portrait of the Stalinist elite who lived in the shadow of a remarkable and dangerous colossus * LITERARY REVIEW * Read it or face social Siberia ... a cross-over success. Academically and intellectually rigorous, it's also a riveting read ... it takes a great writer to make it seem fresh. And Sebag Montefiore certainly does that ... his greatest achievement has been to "humanise" Stalin. Uncle Joe was a mass murderer and a paranoid sociopath. But he was also charming, friendly and flirtatious -- 100 Best Things in the World Right Now * GQ * Grimly brilliant -- Andrew Marr * DAILY TELEGRAPH * Excellent ... This book is like a vast Russian novel full of characters, colour, terror, passion and treachery ... love affairs, marriages, divorces, imprisonments and killings -- Susannah Tarbush * AL-HAYAT * Montefiore has managed to get inside the mind of the 20th century's worst mass murderer. What he has found there will affect your view of human nature ... a thoughtful book of first-class scholarship as well as a transfixing narrative ... vividly recreated by Montefiore's caustically witty prose -- Andrew Roberts * DAILY TELEGRAPH * Its extraordinary revelation of the evil - the complete amorality - at the heart of the dictator's court will change the way historians approach the great historical questions about the Stalinist regime -- Orlando Figes * SUNDAY TELEGRAPH * Montefiore drives his story forward with breathless enthusiasm ... in a work of great importance. Scholars will read it for the valuable new evidence it assembles. Others will enjoy it as a fascinating page-turner and an everyday saga of extraordinary Kremlin folk * FINANCIAL TIMES * Gripping and timely ... [Montefiore] had the bright idea of examining the letters, telegrams and diaries of [Stalin's] intimate associates. As a result, this is a book based on extraordinary primary research ... one of the few recent books on Stalinism that will be read in years to come. The devil is in the detail * GUARDIAN * An extraordinary book... he has managed to persuade a whole generation of little old ladies and elderly men - the wives, granddaughters, servants, nieces and nephews of Stalin's henchmen - to give him a series of extraordinar

Simon Sebag Montefiore is the internationally bestselling author of a number of prize-winning books that have been published in forty-eight languages. CATHERINE THE GREAT & POTEMKIN was shortlisted for the Samuel Johnson Prize; STALIN: THE COURT OF THE RED TSAR won the BBA History Book of the Year Prize; YOUNG STALIN won the Costa Biography Award, the LA Times Book Prize for Biography and the Grand Prix de la Biographie Politique; JERUSALEM: THE BIOGRAPHY won the JBC Book of the Year Prize and the Wenjin Book Prize in China; THE ROMANOVS: 1613-1918 won the Lupicaia del Terriccio Book Prize. He is the author of the Moscow Trilogy of novels: SASHENKA, RED SKY AT NOON and ONE NIGHT IN WINTER, which won the Political Fiction Book of the Year Award. He is also the author of WRITTEN IN HISTORY: LETTERS THAT CHANGED THE WORLD and VOICES OF HISTORY: SPEECHES THAT CHANGED THE WORLD.