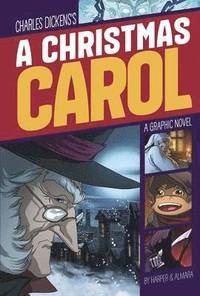 Graphic Revolve Pack A of 4

Benjamin Harper has worked as an editor at Lucasfilm LTD. and DC Comics. He currently works at Warner Bros. Consumer Products in Burbank, California. He has written many books, including Obsessed With Star Wars and Thank You, Superman! Since 1986, Martin Powell has been a freelance writer. He has written hundreds of stories, many of which have been published by Disney, Marvel, Tekno comix, Moonstone Books, and others. In 1989, Powell received an Eisner Award nomination for his graphic novel Scarlet in Gaslight. This award is one of the highest comic book honors. Blake Hoena grew up in central Wisconsin, where he wrote stories about robots conquering the moon and trolls lumbering around the woods behind his parents house. He now lives in St. Paul, Minnesota, with his wife, two kids, a dog, and a couple of cats. Blake continues to make up stories about things like space aliens and superheroes, and he has written more than 70 chapter books and graphic novels for children. Chris Everheart always dreamed of interesting places, fascinating people, and exciting adventures. He is still a dreamer. He enjoys writing thrilling stories about young heroes who live in a world that doesn't always understand them. Chris lives in Minneapolis, Minnesota with his family. He plans to travel to every continent on the globe, see interesting places, meet fascinating people, and have exciting adventures.