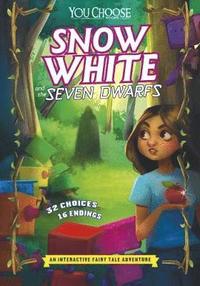 You Choose: Fractured Fairy Tales Pack B of 4

av Jessica Gunderson, Matt Doeden, Blake Hoena, Michele Jakubowski, Eric Braun
Häftad Engelska, 2017-12-07
349
Köp
Spara som favorit
Skickas inom 10-15 vardagar.
Fri frakt inom Sverige för privatpersoner.
In You Choose fairy tales, you're the fairy godmother! These adventures turn fairy tales on their heads (and sideways and backward). Wave your wand and take charge of these tales, from once upon a time to happily ever after ... or not!
Visa hela texten

Jessica Gunderson grew up in the small town of Washburn, North Dakota. She has a bachelor's degree from the University of North Dakota and an MFA in Creative Writing from Minnesota State University, Mankato. She has written more than fifty books for young readers. Her book Ropes of Revolution won the 2008 Moonbeam Award for best graphic novel. She currently lives in Madison, Wisconsin, with her husband and cat. Matt Doeden is a freelance author and editor from Minnesota. He's written numerous children's books on sports, music, current events, the military, extreme survival, and much more. His books Sandy Koufax (Twenty-First Century Books, 2006) and Tom Brady: Unlikely Champion (Twenty-First Century Books, 2011) were Junior Library Guild selections. Doeden began his career as a sports writer before turning to publishing. He lives in Minnesota with his wife and two children. Blake Hoena grew up in central Wisconsin, where he wrote stories about robots conquering the moon and trolls lumbering around the woods behind his parents house. He now lives in St. Paul, Minnesota, with his wife, two kids, a dog, and a couple of cats. Blake continues to make up stories about things like space aliens and superheroes, and he has written more than 70 chapter books and graphic novels for children. Raised in the Chicago suburb of Hoffman Estates, Michele Jakubowski has the teachers in her life to thank for her love of reading and writing. While writing has always been a passion for Michele, she believes it is the books she has read throughout the years, and the teachers who assigned them, that have made her the storyteller she is today. Michele lives in Powell, Ohio, with her husband, John, and their children, Jack and Mia. Eric Braun has written more than one hundred books for kids and teens, including many about sports. He coaches youth baseball and soccer, has two sports-loving sons, and has suffered many disappointments as a lifelong fan of the Minnesota Twins.