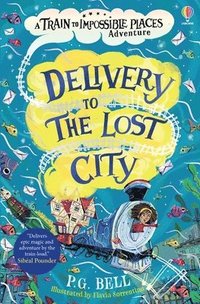 Delivery to the Lost City

av P G Bell
Häftad Engelska, 2021-01-07
9-12 år
111
Köp
Spara som favorit
Skickas inom 5-8 vardagar.
Gratis frakt inom Sverige över 159 kr för privatpersoner.
All aboard for the rip-roaring final book in the bestselling Train to Impossible Places Adventures, with magic at every stop. From the award-winning P.G. Bell, with dazzling illustrations from Flavia Sorrentino, join Suzy on this magical adventure, where the journey will never, ever take you where you expect it to. When the Impossible Postal Express magically arrives to collect Suzy, she sets off on her most difficult delivery yet. A mysterious talking book is stealing words and causing chaos across the whole of the Impossible Places! The book must be returned to a city that's been lost for thousands of years. But without a map to get there, Suzy and Wilmot's journey plunges them into grave danger, deep beneath the ocean. And with time running out, it might not just be the knowledge in the Impossible Places that is lost for ever - Suzy and Wilmot could be too... "Delivers epic magic and adventure by the train-load." Sibeal Pounder
Visa hela texten

Delivers epic magic and adventure by the train-load * Sibeal Pounder * Bell steams in with another extraordinary, exhilarating and inventive story. * Lancashire Evening Post *

P.G. Bell is a native of South Wales, where he was raised on a diet of Greek mythology, ghost stories and Doctor Who. He's had all sorts of jobs over the years, from lifeguard to roller-coaster operator, but has always wanted to write stories. He lives in Wales with his wife Anna and their two children. The Train to Impossible Places, P.G.'s debut series, has enjoyed widespread success, including shortlistings for the Branford Boase Award, the Crimefest Awards and the Waterstones Children's Book Prize.