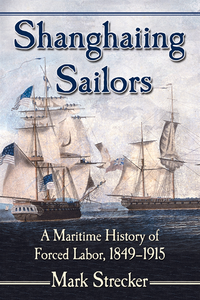 av Strecker Mark Strecker
E-bok (EPUB - DRM), Engelska, 2014-05-19
699
Ladda ned
Spara som favorit
Laddas ned direkt
Läs i vår app för iPhone, iPad och Android
Finns även som
Visa alla 1 format & utgåvor
&quoteShaghaiing,&quote or forcing a man to join the crew of a merchant ship against his will, plagued seafarers the world over between 1849 and 1915. Perpetrators were known as &quotecrimps,&quote and they had no respect for a man's education, social status, race, religion, or seafaring experience. The merchant ships were involved in the opium, tea and gold trades, and the practice was spurred by the opening of the Suez Canal. A major reason for it was a shortage of sailors and the unwillingness of seamen to sail on certain types of ships. They suffered from great deprivations, all for a paltry sum usually squandered during shore leave. Navies and pirates had their own form of shanghaiing called impressment. This work explores the rich history of shanghaiing and impressment with a focus on victims and also considers the 19th century seafarer and the circumstances that made shanghaiing so lucrative.
Visa hela texten