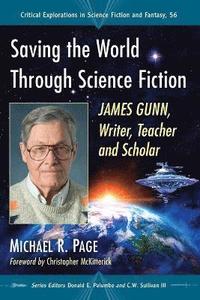 Saving the World Through Science Fiction

av Michael R Page, Donald E Palumbo, C W Sullivan
Häftad Engelska, 2017-02-28
429
Köp
Spara som favorit
Skickas inom 10-15 vardagar.
Fri frakt inom Sverige för privatpersoner.
Finns även som
Visa alla 1 format & utgåvor
One of the major figures in science fiction for over sixty years, James Gunn has been instrumental in the development of science fiction teaching and in making science fiction one of the most vibrant and engaging areas of scholarly study. His genre history Alternate Worlds and his monumental The Road to Science Fiction anthologies introduced countless readers to the genre. While a professor of English at the University of Kansas, Gunn founded the Gunn Center for the Study of Science Fiction in 1982. But Gunn has also been one of the genre's leading writers, whose classic novels Star Bridge (with Jack Williamson), The Joy Makers, The Immortals, and The Listeners, helped shape the field. Now in his nineties, Gunn remains a major voice in science fiction. His latest novel, Transformation (the conclusion of the Transcendental trilogy), will be published in 2017. Michael Page's study is the first to examine the life, career, and writing of this science fiction grandmaster. Drawing on materials from Gunn's archives and from personal interviews with Gunn and providing detailed analysis and commentary on Gunn's fiction, in The Science Fiction, Scholarship, and Teaching of James Gunn Page provides a much-needed exploration of one of science fiction's important figures.
Visa hela texten

"groundbreaking...recommended" --The Midwest Book Review; "a labor of love...gives a clear impression of Gunn's significant influence on the recent history of the genre...invaluable.... Page here takes the initial step towards what may ultimately result in a greater academic appreciation of an important yet critically neglected figure in our field"--Science Fiction Studies; "James Gunn's influence in the science fiction field, as author, editor, teacher and critic, has continued for decades, rising recently to the SFWA Grand Master Award. He has been in my mind from my first days, with his graceful novels and stories, and later a colleague with whom I have engaged in countless spirited discussions. This journey through his work is a fine introduction to a fiercely independent talent."--George Zebrowski, John W. Campbell Award Winner for Brute Orbits and the classic Macrolife; "A book devoted to the life and work of James Gunn, anthologist, scholar, and one of science fiction's most eloquent and influential writers, is long overdue. Michael Page offers us an informative account of Gunn's life and the ways in which it has shaped his work, along with summaries and analyses of his most important stories and novels; Page also notes the ways in which Gunn directly affected the genre and some of its most important writers. Saving the World Through Science Fiction is an essential guide to anyone interested in the history of science fiction and paints a fine portrait of a man whose influence deserves to be much more widely known."--Pamela Sargent, Pilgrim Award-winning editor of the Women of Wonder anthologies.

Michael R. Page is a lecturer in the department of English at the University of Nebraska-Lincoln.