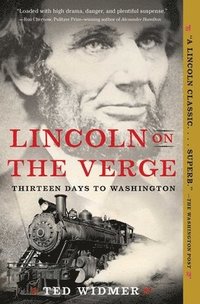 Lincoln on the Verge

av Ted Widmer
Häftad Engelska, 2021-02-18
198
Köp
Spara som favorit
Skickas inom 5-8 vardagar.
Gratis frakt inom Sverige över 159 kr för privatpersoner.
Finns även som
Visa alla 2 format & utgåvor
WINNER OF THE LINCOLN FORUM BOOK PRIZE "A Lincoln classic...superb." -The Washington Post "A book for our time."-Doris Kearns Goodwin Lincoln on the Verge tells the dramatic story of America's greatest president discovering his own strength to save the Republic. As a divided nation plunges into the deepest crisis in its history, Abraham Lincoln boards a train for Washington and his inauguration-an inauguration Southerners have vowed to prevent. Lincoln on the Verge charts these pivotal thirteen days of travel, as Lincoln discovers his power, speaks directly to the public, and sees his country up close. Drawing on new research, this riveting account reveals the president-elect as a work in progress, showing him on the verge of greatness, as he foils an assassination attempt, forges an unbreakable bond with the American people, and overcomes formidable obstacles in order to take his oath of office.
Visa hela texten

"With stunning verve and you-are-there immediacy, Ted Widmer evokes the thirteen day journey of president-elect Abraham Lincoln from Springfield to Washington in which he sealed a fervent bond with his northern followers. Loaded with high drama, danger, and plentiful suspense, the train rides take on an almost mythic dimension, representing the democratic revolution that will soon tip the fractious country into a bloody civil war. A riveting piece of history and a first-rate read." -Ron Chernow, Pulitzer-Prize-winning author of Grant and Washington: A Life "Ted Widmer's Lincoln On the Verge is an impressively vivid and intimate portrait of Abraham Lincoln on his historic 1861 train journey from Illinois to Washington D.C. (where he was sworn-in as America's 16th president). With a deft blend of textured storytelling and fresh research Widmer recounts the widespread uncertainty and fear that consumed the nation on the eve of the Civil War. Highly recommended!" -Douglas Brinkley, author of Rightful Heritage: Franklin D. Roosevelt and the Land of America "Lincoln's journey by train from Springfield to Washington in February 1861 was full of drama and tension caused by a nation breaking in two as the president-elect's passage through seven of the largest Northern states helped unify them for the impending struggle even a delegates from seven seceded states met a thousand miles to the south to form the Confederacy and conspirators in Baltimore plotted to assassinate Lincoln as he passed through their city, a conspiracy that was foiled by a secret midnight transit. Ted Widmer's narrative captures the drama and tension with sparkling prose that projects the reader back in time to that fateful journey." -James M. McPherson, Pulitzer-Prize-winning author of Battle Cry of Freedom: The Civil War Era "A positively elegiac account of the most consequential pre-inauguration journey-and pre-presidential public relations offensive-in American history. Lincoln said at the outset that he had a "task greater than" George Washington faced to preserve the Union the founders had created. Ted Widmer has successfully undertaken a great task of his own in crafting a cohesive, dramatic, and ultimately stirring account of the politically fraught, emotionally draining, and physically dangerous voyage that brought Illinois' favorite son to the nation's capital in time, and shape, to meet his destiny." -Harold Holzer, winner of the Gilder Lehrman Lincoln Prize "A richly detailed and colorful narrative, Ted Widmer's book is wonderfully readable, and surely the fullest account yet of Lincoln's perilous trip to Washington as President-elect." -Douglas L. Wilson, author of Honor's Voice and Lincoln's Sword "Ted Widmer is one of our best contemporary chroniclers of the American story. He immerses readers in a pivotal moment at the brink of the Civil War, bringing our greatest president to life on the page. And as America now faces another moment of seemingly irreparable disunion, Widmer finds relevance - and even reasons for hope - in the past." -Adam Goodheart, author of 1861: The Civil War Awakening "In a wholly original, gorgeously crafted reimagining, Mr. Widmer portrays Lincoln's demanding journey as a Homeric odyssey through perilous terrain toward almost preordained immortality....The story of Lincoln's inaugural journey has never been told in such rich detail....Mr. Widmer brings off his panoramic, almost mystical interpretation with riveting panache. His book is not only a historical achievement but a literary one." -The Wall Street Journal "A book about a time of national crisis, in a time of national crisis." -The Guardian "Lincoln buffs will undoubtedly devour the book. A colorful, richly detailed overture to Lincoln's odyssey." -Kirkus Reviews "Widmer's exploration of this historical footnote deli

Ted Widmer is Distinguished Lecturer at Macaulay Honors College (CUNY). In addition to his teaching, he writes actively about American history in The New York Times, The New Yorker, The Washington Post, and other venues. He has also taught or directed research centers at Harvard University, Brown University, and Washington College. He grew up in Massachusetts and Rhode Island, and attended Harvard University.