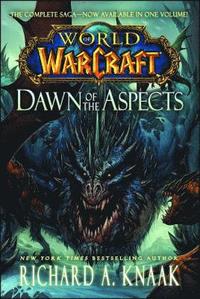 World of Warcraft: Dawn of the Aspects

av Richard A Knaak
(2 röster)
Häftad Engelska, 2013-11-19
129
Köp
Spara som favorit
Skickas inom 7-10 vardagar.
Fri frakt inom Sverige över 159 kr för privatpersoner.
Kan levereras innan jul!
Finns även som
Visa alla 1 format & utgåvor
THE AGE OF DRAGONS IS OVER. Uncertainty plagues Azeroth's ancient guardians as they struggle to find a new purpose. This dilemma has hit Kalecgos, youngest of the former Dragon Aspects, especially hard. Having lost his great powers, how can he-or any of his kind-still make a difference in the world? The answer lies in the distant past, when savage beasts called proto-dragons ruled the skies. Through a mysterious artefact found near the heart of Northrend, Kalecgos witnesses this violent era and the shocking history of the original Aspects: Alexstrasza, Ysera, Malygos, Neltharion, and Nozdormu. In their most primitive forms, the future protectors of Azeroth must stand united against Galakrond, a bloodthirsty creature that threatens the existence of their race. But did these mere proto-dragons face such a horrific adversary alone, or did an outside force help them? Were they given the strength they would become legendary for . . . or did they earn it with blood? Kalecgos's discoveries will change everything he knows about the events that led to the . . . DAWN OF THE ASPECTS
Visa hela texten

Richard A. Knaak is the New York Times- and USA Today-bestselling author of The Legend of Huma, WoW: Wolfheart, and nearly fifty other novels and numerous short stories, including Black City Saint and works in such series as Warcraft, Diablo, Dragonlance, Age of Conan, and his own Dragonrealm. He has scripted a number of Warcraft manga with Tokyopop, such as the top-selling Sunwell trilogy, and has also written background material for games. His works have been published worldwide in many languages. His most recent releases include Shade--a brand-new Dragonrealm novel featuring the tragic sorcerer--Dawn of the Aspects--the latest in the bestselling World of Warcraft series, and the fourth collection in his Legends of the Dragonrealm series. He is presently at work on several other projects.