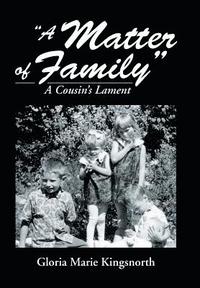 A Matter of Family

av Gloria Marie Kingsnorth
Inbunden Engelska, 2012-09-28
329
Köp
Spara som favorit
Skickas inom 10-15 vardagar.
Fri frakt inom Sverige för privatpersoner.
Finns även som
Visa alla 1 format & utgåvor
The following memoirs involve one woman's attempt to expose a family curse bestowed upon them through trickery and deception. This novel is a search for answers, a struggle for truth and integrity. This is an argument for karmic justice for the author and her extended family members' and their birthright. The following pages are one woman's journey through hell. This is a quest to rid herself of the ghosts of her past and reveal her multibillionaire cousin's hidden identity

"It's difficult to determine if Kingsnorth's story is one of fiction or perceived truth, since the preface says "novel," but the content reads like a memoir."
-Kirkus Review

" A Matter of Family: A Cousin's Lament is a memoir of author Gloria Marie Kingsnorth's fictional self, written in letter form to her alleged cousin, billionaire Grant Wilson Billings. The author's writing keeps the reader enthralled. Her narrative bends and refracts the black and white of her protagonist's life into ambiguous gray...

Motifs similar to those found in the work of Edgar Allen Poe, like incest, murder, and insanity, are expertly infused in this modern Gothic."
Four Stars (out of Five)
-Clarion Review
Visa hela texten

Bloggat om A Matter of Family