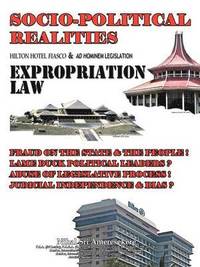 Fraud on the State & the People ! Lame Duck Political Leader

av Nihal Sri Ameresekere
Häftad Engelska, 2012-06-29
1109
Köp
Spara som favorit
Skickas inom 10-15 vardagar.
Fri frakt inom Sverige för privatpersoner.
`Socio-political realities' at the highest levels in society are lucidly revealed by the Author documenting real life experiences, in interacting with Presidents, Prime Ministers and Ministers, demonstrating their subservience to international pressures by influential powerful countries, and their shameless shielding of fraudulent/corrupt Ministers/Officers. Author discloses non-enforcement of the rule of law, even by Attorney Generals, against those affluent and powerful, eventhough the rule of law is the cornerstone of democracy. There is shocking revelation, of how Japanese Government, through Diplomats, pressurized to settle and cover-up a colossal fraud, blatantly perpetrated on a country and impoverished people, to prevent criminal prosecution thereof; even inducingly offering to negotiate with a terrorist organization, to resolve the issue of armed terrorism, ironically created by social injustice, including economic terrorism. Constitutional Minister, President's Counsel, charged for fraud utters blatant falsehoods. Justice Minister and Foreign Minister, President's Counsel, both scholarly alumni of Oxford University, camouflages to whitewash fraud, taking duplicitous stances. This Book is in two Sections, one dealing with `Political and Diplomatic Hypocrisy', and the other on an `Ad Hominem Legislation - Expropriation Law', enacted in violation of UN Universal Declaration of Human Rights, and ultra-vires the Constitution. How the country's highest judiciary deals with challenges to the perverse legislative process is revealing, with shocking disclosure of the Chief Justice's husband being given plum political office, with a scandalous controversy exploding in the public domain; just as the Author applies for a review of the pre-enactment Determination by Chief Justice for such Statute, as having been made per-incuriam and ultra-vires the Constitution, adducing additional grounds of perceived bias, upon which Their Lords of Appeal exercising inherent jurisdiction, in similar circumstances, rescinded a previous Judgment of the House of Lords in extradition proceedings re - Chilean President Pinochet.
Visa hela texten