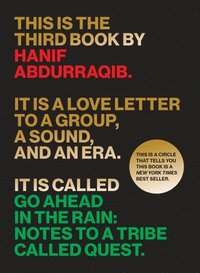 Go Ahead in the Rain

Notes to A Tribe Called Quest

av Hanif Abdurraqib
(1 röst)
Häftad Engelska, 2019-02-01
159
Köp
Spara som favorit
Skickas inom 10-15 vardagar.
Fri frakt inom Sverige över 159 kr för privatpersoner.
Finns även som
Visa alla 2 format & utgåvor
A New York Times Best Seller A February IndieNext Pick Named A Most Anticipated Book of 2019 by Buzzfeed, Nylon, The A. V. Club, CBC Books, and The Rumpus. And a Winter's Most Anticipated Book by Vanity Fair and The Week Starred Reviews: Kirkus and Booklist "Warm, immediate and intensely personal."--New York Times How does one pay homage to A Tribe Called Quest? The seminal rap group brought jazz into the genre, resurrecting timeless rhythms to create masterpieces such as The Low End Theory and Midnight Marauders. Seventeen years after their last album, they resurrected themselves with an intense, socially conscious record, We Got It from Here . . . Thank You 4 Your Service, which arrived when fans needed it most, in the aftermath of the 2016 election. Poet and essayist Hanif Abdurraqib digs into the group's history and draws from his own experience to reflect on how its distinctive sound resonated among fans like himself. The result is as ambitious and genre-bending as the rap group itself. Abdurraqib traces the Tribe's creative career, from their early days as part of the Afrocentric rap collective known as the Native Tongues, through their first three classic albums, to their eventual breakup and long hiatus. Their work is placed in the context of the broader rap landscape of the 1990s, one upended by sampling laws that forced a reinvention in production methods, the East Coast-West Coast rivalry that threatened to destroy the genre, and some record labels' shift from focusing on groups to individual MCs. Throughout the narrative Abdurraqib connects the music and cultural history to their street-level impact. Whether he's remembering The Source magazine cover announcing the Tribe's 1998 breakup or writing personal letters to the group after bandmate Phife Dawg's death, Abdurraqib seeks the deeper truths of A Tribe Called Quest; truths that-like the low end, the bass-are not simply heard in the head, but felt in the chest.
Visa hela texten

"The beauty of Go Ahead in the Rain, of its engagement with Tribe Called Quest's jazz-influenced hip-hop, is how Abdurraqib discards well-trodden assumptions about what criticism is: that it must relegate the critic to a position of detached, passionless analysis, or that it must proceed in orderly, logical fashion in order to prove a point. In place of these conventions Abdurraqib presents a work concerned with enmeshment in and with the music, the history that it expresses and alters, and the communities that have given us this music...Go Ahead gives us a glimpse into a criticism that doesn't just subject black music to the conventions of the critical essay. Rather, it allows black music to contort and reinvent those conventions." * National Book Critics Circle * "An encompassing, engrossing look at one influential group's fomentation and legacy." * Bustle * "[Go Ahead in the Rain] manages to be both a vivid history of early hip-hop and an extended elegy for a rap group that defined the author's sensibility." * Guernica * "A must-read for Tribe fans, Go Ahead in the Rain is also a love letter to the music of our youth, and how our relationship with those musicians can become such a vital part of ourselves as we move through life." * Bad Feeling Magazine, "Best of 2019: The best pop culture books" * "Abdurraqib's erudite ode to A Tribe Called Quest walks readers through their unique formation, but also easily freewheels across late 80s and 90s pop and hip hop culture...His depiction of a singular time in America (which he grounds in his own reflections of high school), when technology was changing everything rapidly and music felt less stratified, and his exploration of sample culture before the tightening effects of copyright laws, are particularly precise and just right." * Publishers Weekly, "The Best Books We Read in 2019" * "Abdurraqib identifies with Phife Dawg, and his letter to the late rapper is particularly moving. Go Ahead in the Rain is not comprehensive, but at times it is as moving as the music itself." * Irish Examiner, "Noteworthy music books of the year" * "Go Ahead in the Rain is a sparkling tribute to A Tribe Called Quest...Abdurraqib is an excellent guide through the cultural landscape that made (and unmade) Tribe, effortlessly weaving socio-cultural history, music criticism and personal anecdote in an accessible manner, to remind you if you had forgotten and convince you if you had been unaware of the band's art and impact beyond their Lou Reed-sampling hit 'Can I Kick It'." * Times Literary Supplement * "Booklength criticism masquerading as memoir, an account of growing up as boho youth whose ears and brains get opened, Hanif Abdurraqib's fond exegesis chews over A Tribe Called Quest like even the most meticulous 33 1/3 entry doesn't." * Humanizing the Vacuum, "The best books of 2019" * "With [Go Ahead in the Rain], Abdurraqib creates a lasting work with an ambitious scope. He obscures the line between social commentary, memoir, and biography. Most importantly, Abdurraqib constructs a worthy homage to one of hip-hops most innovative artists." * Labour/Le Travail * "The beauty of Hanif Abdurraqib's trim volume is that it doesn't try to be definitive. Instead, Abdurraqib embraces the subjectivity of his fandom, putting the seminal hip-hop duo into context via his own experiences coming of age along with the genre. There's a lot of critical insight into this first great book about ATCQ, one that hopefully won't be the last but will endure regardless." * The Current, "Best music books of 2019" * "A poetic salute to what Abdurraqib considers to be the greatest rap group of all-time." * Paste Magazine, "2019 Gift Guide for Music Lovers" * "Abdurraqib explores fandom, artistry, love, and pretty much everything else there is, with remarkabl

Bloggat om Go Ahead in the Rain

A visiting writer in the MFA program at Butler University, Hanif Abdurraqib is an acclaimed poet and cultural critic whose work has appeared in the New York Times, MTV News, and other outlets. A nominee for the Pushcart Prize, he is the author of the highly praised poetry collection The Crown Ain't Worth Much and the essay collection They Can't Kill Us Until They Kill Us, which was included in the Chicago Tribune's 25 Must-Read Books list for fall 2017 and received recognition from reviewers coast-to-coast, including a starred review in Publishers Weekly. He is currently at work on They Don't Dance No Mo', a history of black performance in the United States.