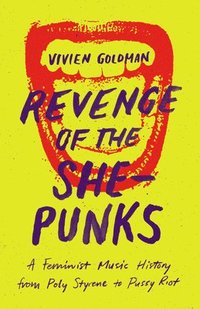 A Feminist Music History from Poly Styrene to Pussy Riot

av Vivien Goldman
Häftad Engelska, 2019-05-13
169
Köp
Spara som favorit
Skickas inom 10-15 vardagar.
Fri frakt inom Sverige för privatpersoner.
As an industry insider and pioneering post-punk musician, Vivien Goldman's perspective on music journalism is unusually well-rounded. In Revenge of the She-Punks, she probes four themes-identity, money, love, and protest-to explore what makes punk such a liberating art form for women. With her visceral style, Goldman blends interviews, history, and her personal experience as one of Britain's first female music writers in a book that reads like a vivid documentary of a genre defined by dismantling boundaries. A discussion of the Patti Smith song "Free Money," for example, opens with Goldman on a shopping spree with Smith. Tamar-Kali, whose name pays homage to a Hindu goddess, describes the influence of her Gullah ancestors on her music, while the late Poly Styrene's daughter reflects on why her Somali-Scots-Irish mother wrote the 1978 punk anthem "Identity," with the refrain "Identity is the crisis you can't see." Other strands feature artists from farther afield (including in Colombia and Indonesia) and genre-busting revolutionaries such as Grace Jones, who wasn't exclusively punk but clearly influenced the movement while absorbing its liberating audacity. From punk's Euro origins to its international reach, this is an exhilarating world tour.
Visa hela texten

"While Goldman jumps around, hopping from band to band, she places the female musical foment within the critical context of feminist theory and the cultural context of society's upheaval...Known as the 'Punk Professor' as an adjunct at NYU, Goldman extends her authority here." * Kirkus *

Born in London, Vivien Goldman has been a music journalist for more than forty years and was the trusted chronicler of Bob Marley and Fela Kuti. She was a member of the new-wave bands Chantage and The Flying Lizards; Resolutionary, a retrospective compilation album of her work, was released in 2016. She is an adjunct professor teaching Punk, Afrobeat, and Reggae at New York University, where the Vivien Goldman Punk and Reggae Collection is archived in the Fales Library. A former documentarian, her five previous books include The Book of Exodus: The Making and Meaning of Bob Marley and the Wailers' Album of the Century. Goldman co-wrote the book for Cherchez La Femme, the Kid Creole musical that premiered at the La Mama Theatre in NYC in 2016.

Womanifesto: The Opening Vamp 1. Girly Identity: Who Be Me? 2. Money: Are We Our Stuff? 3. Love/Unlove: Busting Up the Binary 4. Protest: Woman the Barricades Outro: Our Coda Acknowledgments Index